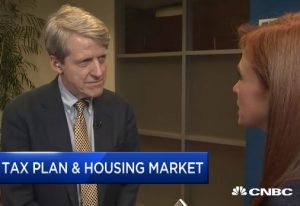 Shiller is sticking with the irrational exuberance that plays into housing decisions – and I agree:

He also doesn’t think home prices will fall if the cap on the amount of mortgage debt (currently $1 million of debt) one can deduct interest payments on is cut in half. About 2.9 million borrowers have mortgages with an outstanding balance higher than $500,000, according to Black Knight.

“The general idea is it would push prices down if people are rational,” which Shiller says they are not when it comes to housing. He is the author of the bestselling book “Irrational Exuberance.”

He does, however, think that if homeowners can no longer deduct their property taxes, or if the amount they can deduct is limited under the new tax plan, that would be a big deal — at least to rich people.

“That is going to be a substantial hit to people who are paying a lot of property taxes, and it might be a consideration that you make before you buy a big mansion in some high property tax state,” said Shiller.

While economists, housing advocates and housing industry lobbyists argue the effects of the Republican tax plan and worry about the possibility of higher interest rates, Shiller, who has studied the economics of housing dating back to the 1800s, sees very little rhyme or reason to any of it. The human factor — the emotional aspect of most people’s single largest investment, a home — is far greater than the market stimuli that are accorded such importance.

“I tend to think it’s not as great as you imagine because people are people, and I don’t find that historically home prices have relied at all predictably to changes in things like interest rates,” said Shiller, pointing to the huge boom in housing in the last decade. Interest rates didn’t move at all during that time.

That boom, instead, was fueled by a complete crater in any type of lending standard in the mortgage market. People were offered loans at almost no cost, so they took them — and never believed that home prices could fall. In the early 80’s during a huge spike in interest rates to double digits, home prices fell slightly, but people kept buying homes.

“Things happen that have no explanation,” said Shiller.