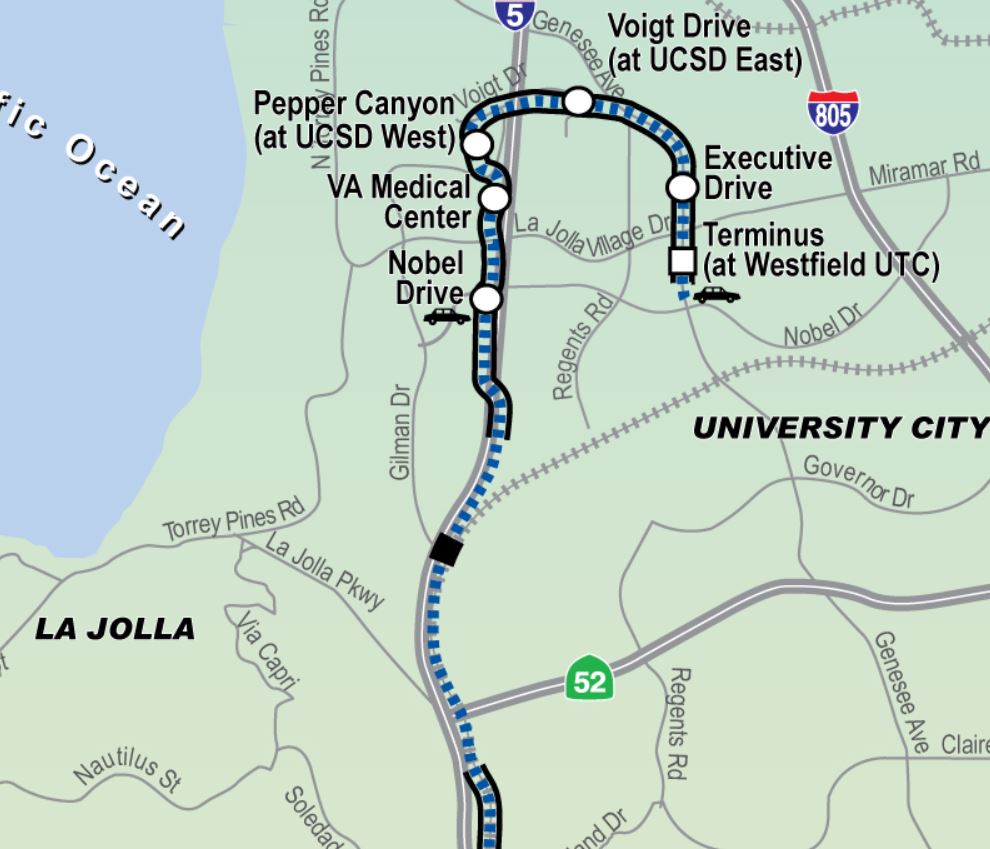 On September 14, 2016, the top transit official in the United States committed $1 billion toward building the San Diego region’s newest trolley line, signing an agreement that will provide 50 percent of the funds to extend the popular transit service for 11-miles from Old Town to UC San Diego and the University City community.

The largest public transit project in the history of the San Diego region, the Mid-Coast Trolley Extension will extend the existing Blue Line, building nine new stops along the north coast of San Diego, including near Mission Beach, Pacific Beach, the VA Medical Center, the UC San Diego campus, and the dense residential and commercial areas along Genesee Avenue.

“The Mid-Coast Trolley will bring fast, reliable transit to the places where it’s most needed, including our largest research university and biggest employment center,” SANDAG Chair and San Diego County Board of Supervisors Chair Ron Roberts said. “At the same time, it is an outstanding example of our ability to leverage the region’s local TransNet dollars to bring in outside money to complete major transportation projects.”

“FTA is proud to partner with San Diego to bring new transit options to this growing region,” said FTA Acting Administrator Carolyn Flowers. “With the population along the Mid-Coast corridor expected to grow nearly 20 percent in the coming decades, this Trolley extension will offer a much-needed alternative to traffic congestion in the years ahead.”

Pre-construction activities for the project – primarily the relocation of underground utilities out of the project alignment – are already underway. Primary construction is expected to begin this October, with service anticipated to start in 2021.

Once the extension is built, transit riders will enjoy a one-seat ride (no transfers) from San Ysidro to University City. Planners estimate that the project will provide more than 20,000 new transit trips every weekday.

The construction of the Mid-Coast project is expected to produce more than 14,000 new local jobs. Even after the construction is over, the Mid-Coast project will have an estimated $116 million of annual economic impact on the region by reducing congestion, reducing parking needs, and increasing access to jobs. The Mid-Coast corridor supports more than 325,000 jobs. The two ends of the route – Downtown San Diego and University City – account for nearly half of that total.

My tour of the area: