Housing Bubble? Just Wait It Out

An article comparing the performance of residential and commercial real estate during the boom-bust-boom:

Housing prices have been on a tear over the last five years. The Case-Shiller national composite has risen 35 percent since its post-crash bottom in 2012, and is currently just above its pre-crisis peak, set in the spring of 2006.

What we see here are two different measures of the growth in housing prices: 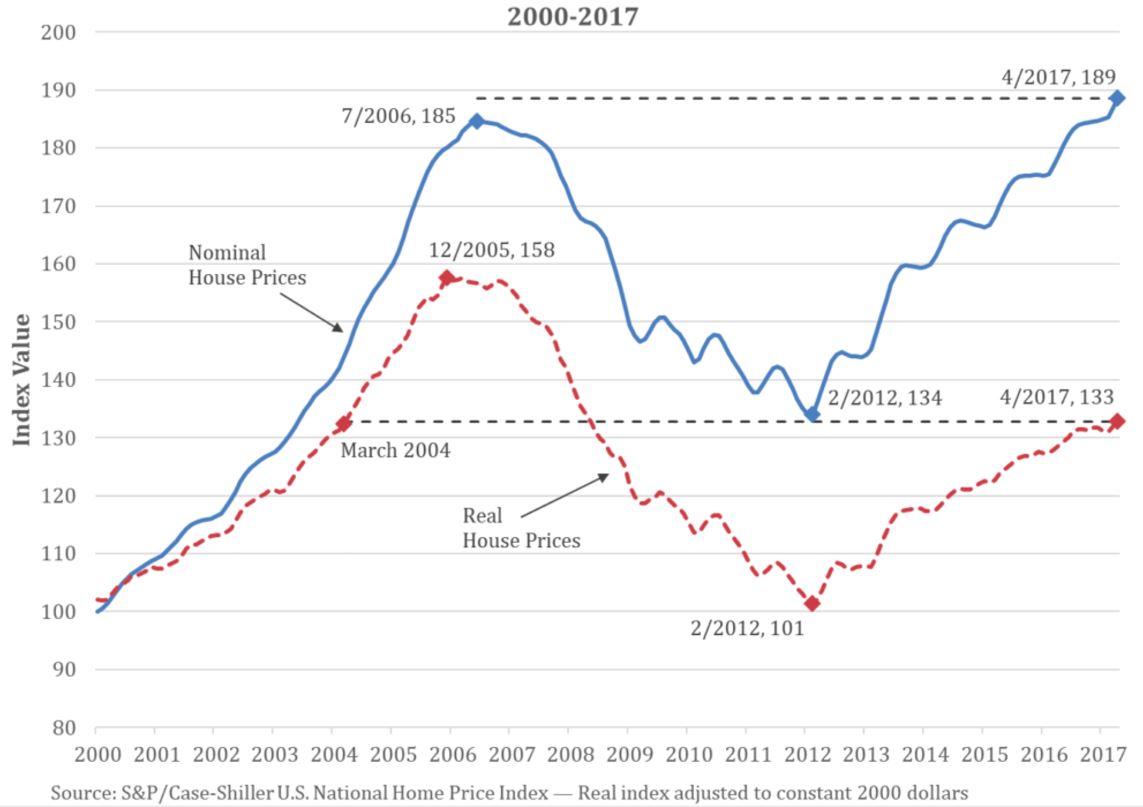 Both measures are indexed to 100 in the year 2000, so the value can be interpreted as the percentage growth since 2000. The red line represents the growth in real housing prices, or prices after they have been adjusted for inflation. The blue line represents the percentage growth in housing price without accounting for inflation. Economists refer to this as nominal housing values.

Nominal values have rebounded strongly over the past six years, despite a weak economy, increased financial regulation, and a backlog of foreclosures. This rise in nominal values is key because it is tied to the viability of mortgage contracts.

Suppose homebuyers in 2007 had gotten caught up in bubble fever, taken on a mortgage that was a bit too much for them to afford, and then watched the value of their investment collapse. Well, if they could have ridden the wave out for 10 years, then they could have gotten back out at least what they put in. Ten years is a long time, and according to the NAHB, it’s a bit less than how long the median homeowner stayed put through the 90s and early 2000s.

Riding the bust out would have been tough, but not wildly out of the ordinary for the average homebuyer. Yet, it only took this long because inflation has been extraordinarily low, rarely rising to two percent a year. A faster rate of inflation would have brought homeowners out of the dip even sooner.

All of this to say that buying at the peak of the housing bubble was not nearly as insane as one might think. If you planned to stay in the house a normal length of time, you wouldn’t have lost any money.

Now, you could have done better by waiting if you had known that a housing bust was coming. But not timing a bust is not quite the same thing as buying into a bubble.

Buying into a bubble suggests that you are paying irrationally high prices that are premised only on the notion of “some-greater-fool” coming along and rescuing from your mistake. As we can see that is not the case. Missing the bust simply means that you were not savvy enough to time a fluctuating market. Accepting one’s inability to get in at the just the right time is considered wisdom in stock and bond markets, and with good reason.

There is a conceptual paradox with timing the market by buying when prices are low. If you’re right and this really is the best time to get in, then everyone should be getting in. Yet, if everyone was getting in, then prices would already be rising due to the high demand. Thus, low prices which are attracting you are at the very same time a signal to stay away. Wise investment counselors advise their clients to ignore the ups and downs as much as possible, and buy and sell based on your own needs, not your perception of market trends.

Could the same thing be true of housing?

That is, might it be the case that we have entered a phase where sometimes housing prices will go down? Wise homeowners buy and sell based on their own needs, not in some attempt to judge the market. The market will be buffeted by forces that are nearly impossible for the average homeowner to gauge—forces like international changes in liquidity.