Could this be one of the growing trends that might add more reasonably-priced homes to our inventory?  Thanks Daytrip for sending in!

To casual visitors, this colonial town in southern Ecuador looks like it was torn from the pages of history. With its cobbled streets, soaring cathedrals and bustling markets, it exudes a lazy, old world charm.

But Cuenca is also on the cutting edge of a very modern trend: providing a safe haven for U.S. retirees who have found themselves unwilling — or unable — to live out their golden years at home.

The growing wave of ex-pat seniors is not only upending notions about retirement in the hemisphere but reshaping the face of communities throughout the Americas. And the trend is expected to grow as waves of baby boomers exit the workforce ill-prepared for retirement.

There’s no accurate way to measure the phenomenon, but the Social Security Administration was sending payments to 380,000 retired U.S. workers living abroad in 2014 — up 50 percent from a decade ago.

In the Americas, records show that seniors are flocking to Canada, Mexico, Colombia, the Dominican Republic and Ecuador. 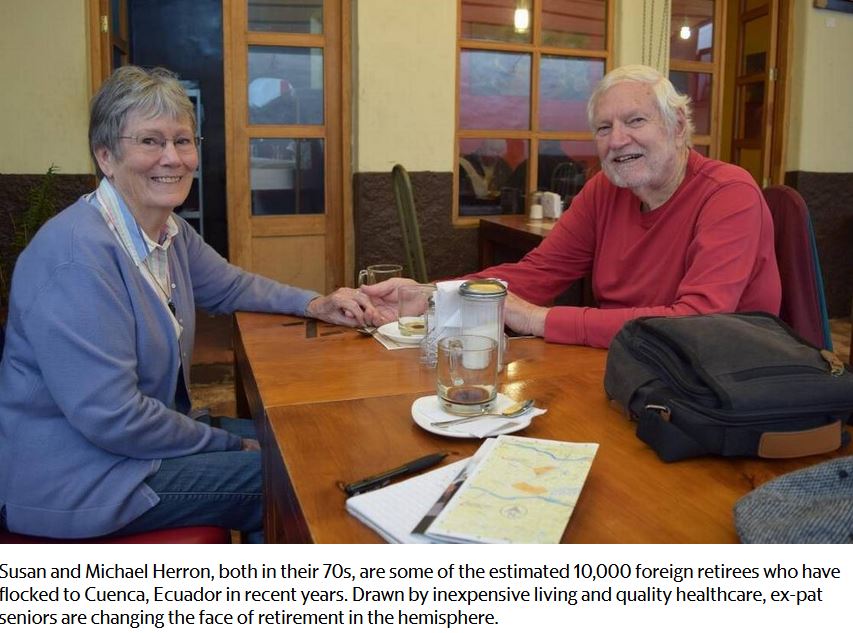 On a recent weekday, Susan and Michael Herron were having a long, lazy breakfast by the side of the Tomebamba River that cuts through the city. Both in their 70s, they have the lean look of people whose principal mode of transportation is walking — and a sense of adventure usually found in people half their age.

They had previously “retired” in Central Florida, Georgia, Alaska, South Carolina and Panama before finally settling on Ecuador — because it was beautiful and cheap.

“We could have survived [financially] in the United States if we had moved to a more rural area,” said Susan, 71, a semi-retired property manager. “But we wanted to take this chance while we were still healthy enough to be able to do it.”

In Cuenca, a city of about 350,000 people, they’ve found robust public transportation, an extensive museum network, solid healthcare and markets bursting with fresh fruits and produce. It’s a place where their two-bedroom, two-and-a-half bath apartment costs less than $400 a month. They’ve found that for about $1,500 a month, they can live a solidly upper-class lifestyle, dining out frequently and traveling.

“In the United States, we couldn’t afford to go anywhere,” Susan explained. “We were having to stay home.”

If there is a real driving force for retirees, it’s healthcare. Although the Trump administration has said it will leave Medicare untouched, its desire to scrap the Affordable Care Act amid rising premiums has created anxiety among seniors, said Prescher with International Living.

“Look at what retirees [in the U.S.] are facing,” he said. “They have a fixed income, maybe their investments haven’t been doing that well and now nobody knows what public healthcare will look like in the United States.”

“In the face of that … if you can live in a place where you can cut your cost of living in half while getting access to high quality healthcare, you have to think seriously about it,” he added.

James Skalski, a 74-year-old semi-retired architect and builder from Minneapolis, credits the city’s quality but quirky medical establishment for turning his life around. When he arrived here three years ago, he was 20 pounds overweight, had high blood pressure and was running from a family history of heart disease.

“In the United States, all they would do for you is give you drugs,” he said. Here, a holistic doctor worked with him for six months, using a regimen of nutrition, chelation therapy and meditation that Sakalski said reversed all that. Price tag: $1,600.

“Just last month, I had to go to the dentist for inflamed gums, and the dentist was using state-of-the-art X-ray equipment made in Germany,” he said. The X-ray, antibiotics and dentist visit ran him less than $30. He encouraged a friend to travel from Alaska for dental work. With flights and all, it was still cheaper.

“It was a real eye opener,” he said. “For a guy like me who’s not a millionaire, this all makes sense.”

Cuenca’s survey of retirees found that most were either paying for healthcare out-of-pocket or had private healthcare. But some are reliant on Ecuador’s public healthcare system. Foreigners only need to pay into the system for three months before they have access to full benefits.

Because Medicare doesn’t cover most costs abroad, the Herrons, for example, were paying $84 a month to belong to the public healthcare system. When Michael, a 76-year-old retired IT worker-turned-novelist, recently ended up in the emergency room for a cardiac issue, the total bill was $133. In the past, the same procedure in the United States had been billed to his insurance company at $186,000.

Crespo, the city official, said the retirees are pumping money into the economy, but there are growing concerns over how they might be affecting the healthcare system.

“We’ve heard about cases where someone night need brain or heart surgery that might cost $300,000 in the United States and they have the operation here for $300 because they had paid into the system for three months,” she said. “The price differences are abysmal.”

The Herrons say they’ve tried to isolate themselves from the U.S. political news by not having a television. And while they say they have no desire to return to the United States, they’re open to continuing their retirement adventure in some other country.

But for the moment, they’re still enjoying the little details of laid-back Latin American living.

“We keep pinching ourselves,” Susan said. “We can have a two hour lunch and not be rushed out of the restaurant.”