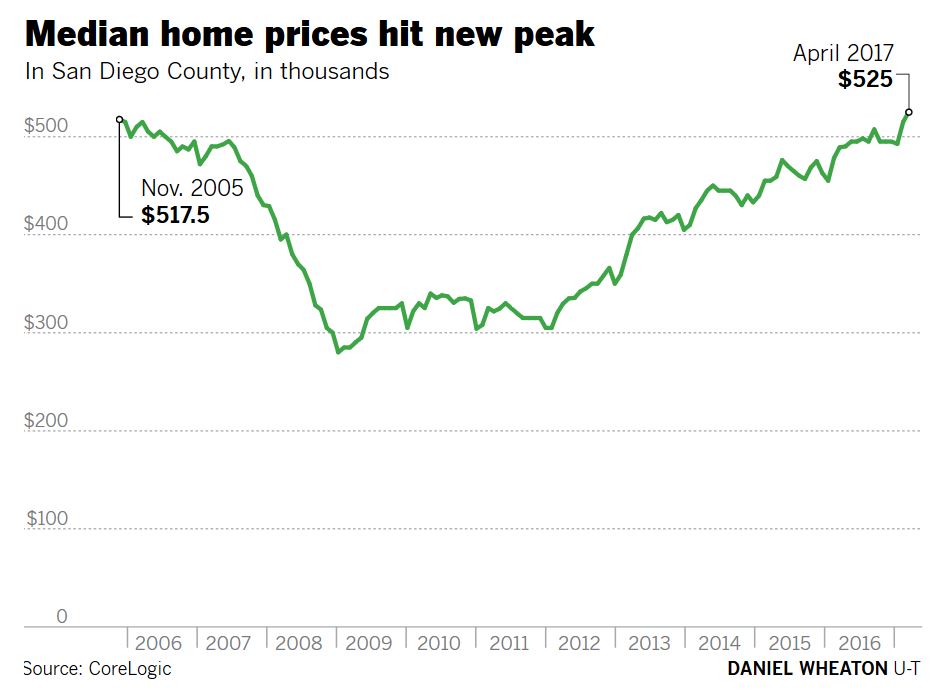 Glad to see the U-T relying on Rich for an explanation!

High demand and tight supply appear to have pushed the price beyond previous milestones. There were 3,618 homes sold in April — the lowest for that month since 2012.

Supply is dwindling, too. In April, there were 4,763 active home listings in San Diego County, said the Greater San Diego Association of Realtors. That is down from 5,754 listings the same time last year and the 6,386 in 2015.

When adjusted for inflation, the nominal November 2005 peak of $517,500 would be roughly $644,500 in 2016 dollars. Still, the San Diego median price is noteworthy for increasing 7.4 percent in a year and outpacing most of Southern California.

Housing bubble fears are likely with the new median but home prices would have to rise 40 percent (assuming no income or rent growth) to be as overvalued as much as they were during the last peak, said Rich Toscano, who predicted the last housing crash on his blog Professor Piggington’s Econo-Almanac.

“Homes are definitely expensive when you compare purchase prices to rents and incomes,” he said. “They are the most expensive they’ve been outside the bubble. But, it still doesn’t compare to the expensiveness of the bubble.”

“In theory, for as long as low rates persist, they could keep supporting the prices,” he said. “The big question is if that will continue to happen and the smartest people in the world disagree on that.”