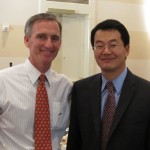 N.A.R. home-sales forecasts are a moving target. In October they guessed 6 million sales for 2017, and in December they said 5.5 million:

Single-family existing home sales are set to see their best year since 2006, driven by robust job gains and improving household confidence, according to the forecast from the National Association of Realtors.

While existing home sales are increasing, low levels of supply and rising affordability concerns are creating headwinds for sales and threatening the low homeownership rate.

The first quarter came in with the best sales pace for existing homes in a decade; NAR Chief Economist Lawrence Yun expects that pace to continue, finishing off 2017 with 5.62 million sales, the best pace since 2006. This would represent an increase of 3.5% from 2016.

And home sales aren’t the only thing predicted to rise. NAR also forecasts an increase of 5% in existing home prices in 2017.

“There’s little doubt first-time buyer participation would improve and the homeownership rate would rise if there was simply more inventory,” he said.

The N.A.R. only talks about the annualized sales pace, which is murky. Let’s look at how the actual year-to-date sales compare with previous years:

Detached-home Sales Between Jan 1st and May 15th:

The 2017 NSDCC sales are tracking 1.6% ahead of last year, and if mortgage rates can hold around the current 4%, we should carry on. It feels like we have a maturing market though, and a general malaise could drift into the equation towards the end of the summer season.