Would you let traffic dictate where you live? 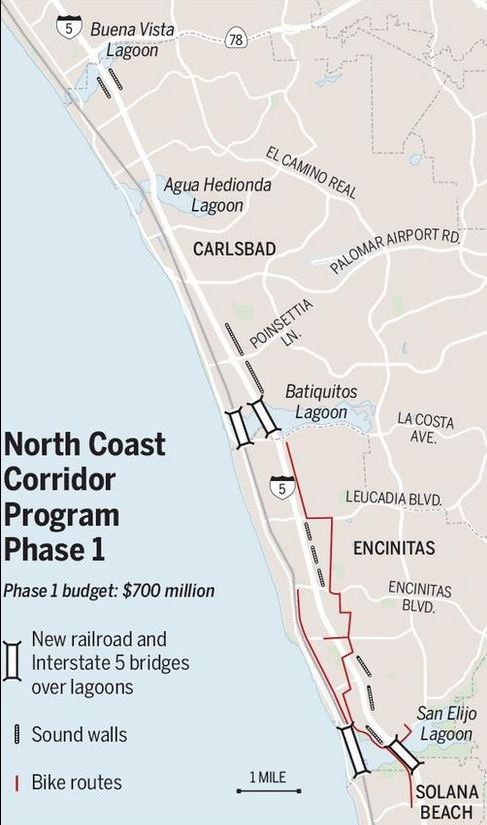 And the freeway bridges are just the beginning. The $700 million Phase 1 work will include:

? Adding a single carpool lane in each direction by cutting into the freeway median from Lomas Santa Fe Drive in Solana Beach to state Route 78 in Oceanside.

? Building bicycle and pedestrian bridges and connected trails, as well as a wide range of wetlands and lagoon restoration projects.

Doing the work all together minimizes the disruption to travelers and the environment, said Allan Kosup, director of the North Coast Corridor for Caltrans. Also, it allows the coordination of large projects with small ones.

“It’s a holistic approach,” Kosup said. “In doing so, you are finding once-in-a-lifetime opportunities that you wouldn’t have otherwise. A perfect example is the bike and pedestrian bridges.”

Commuters, however, are certain to feel some pain before they see the gain.

Though most of the work requiring lane closures will be done at night, Kosup said, any large construction project along the freeway causes disruptions.

“Anytime we are doing that amount of construction, people slow down,” Kosup said, adding that even during the day drivers sometimes hit the brakes just to look at the work under way.

The freeway between La Jolla and Oceanside carries an average of more than 700,000 vehicle trips a day, according to SANDAG. Growth forecasts vary, but the county’s population has more than doubled since the freeway was built, and traffic is certain to increase in the decades ahead.