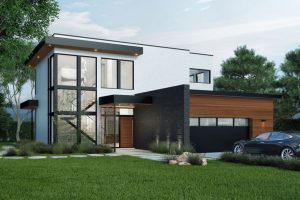 In the best way possible, Stanford professor Mark Jacobson‘s new house is like a giant Erector Set, snapped together in less than a week on an irregular, pie-shaped lot near the university. It’s a 3,200 square foot modular home, and the frame is made entirely of steel.

Dr. Jacobson, head of Stanford’s Atmosphere and Energy Program, says he didn’t want to build a new house, but nothing on the market right now was quite up to his standards insofar as green building goes. So he called BONE Structure, a Canadian prefab homes company that opened a San Francisco office last year, to see if they could do better.

The house, reportedly costing an estimated $1.5 million, is designed with zero emissions, operating off of solar panels on the roof and storing juice in an enormous lithium battery designed by Tesla Motors. If it works right, it will use no consumer electricity at all, making it a passive house.

The steel frame is made from 89 percent recycled material. BONE’s sales pitch is that, although the parts are all manufactured in Canada (delivery takes five or six weeks), the clip-together design means that you can customize the size and layout of the house, rather than picking from prefabricated rooms.