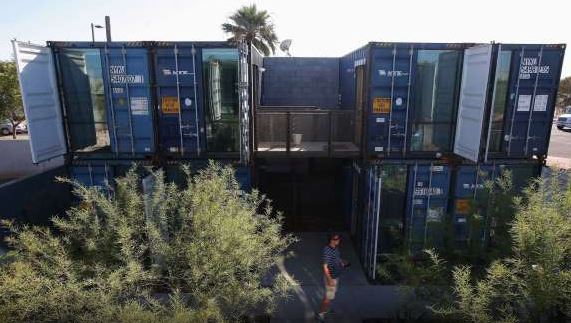 Hat tip to Richard for sending in this article – I love these!

PHOENIX — A stack of shipping containers sitting in a lot in an industrial section of Phoenix has some developers thinking inside the box.

The structures usually used to transport cargo have been transformed into eight apartments. Scuff marks, old serial numbers and shipping company logos remain, but a look inside each unit reveals a 740-square-foot modern home.

“It doesn’t even feel like a shipping container. It’s also insulated really well,” said Patrick Tupas, who is in the Air Force and along with his wife signed a one-year lease for $1,000 a month. “It just feels like a regular apartment.”

There was a downside, he said — passers-by asking questions and sometimes pressing to see inside their home.

Housing and retail projects using the containers have popped up in recent years in Las Vegas, Detroit and Washington, D.C., as developers and cities try to cater to millennials and baby boomers who want to live closer to the cultural offerings in urban hubs.

To meet those needs, “cargotecture” has become a quick way to fill urban housing gaps.

“They are faster, cheaper and now potentially have much more of an aesthetic range,” said Dana Cuff, director of cityLAB, a think tank at UCLA that looks at architecture and urban growth. Some mask their shipping origins, but the ones in Phoenix don’t, she said.

In the Containers on Grand project in Phoenix, the architecture firm, StarkJames, designed the apartments in a way that retained the corrugated metal exteriors. Each unit is made of two containers, but inside there are no signs of the cargo hauling days.

The walls are painted white. The original wood flooring is encased in epoxy. There is enough space for a bedroom and living area.

The two rooms are connected by two separate hallways. One hallway has the kitchen, oven and some counter space. The other one has closet space and a nook. There is also a washer and dryer unit. Monthly rent averages about $1,000.

All but two of the eight units are occupied. One is being marketed as a vacation rental.

In Washington’s Brookland neighborhood, university students and young professionals have been living in a four-story housing cluster since September 2014. In Las Vegas, containers make up the building blocks of a downtown retail complex.

In Detroit, Three Squared Construction is working on $14 million in new projects involving shipping containers because they save time. The company erected the city’s first residential shipping-container development in April 2015.

The three-story building is used as a showcase with the top floor periodically rented out. CEO Leslie Horn said there’s been a high demand among millennials and “empty-nesters.” 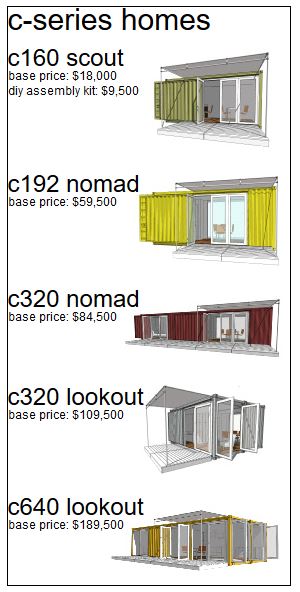