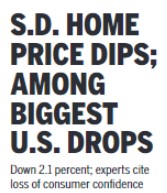 Every once in a while, a sliver of truth slips into the mainstream media articles.

After the usual negativity spewed throughout the front-page UT article about the local Case-Shiller Index declining at one of the worst rates of any town in America, this quote appears at the bottom:

Zillow senior economist Nicole Bachaud wrote in an analysis of the report that sellers’ hesitancy to put homes up for sale might mean prices won’t change that much.

“Would-be sellers are sticking their ground and holding tight to the inventory they currently own,” she wrote. “As a result, prices might not continue to plunge down as much as some projections anticipate.”

Nicole has been with Zillow since 2019 and a senior economist since August.  Kudos to her for stating what all other economists are ignoring, like Mark Zandi and the other clowns who have decades of experience and keep telling people that real estate will be crushed any minute now.

I have a real problem with the common belief that we can’t predict the future.

I guarantee you that our local inventory in 2023 will be the lowest on record, and will be the major driver of market activity.  How do I know? In all other previous downturns, the banks drove the market by dumping foreclosures for whatever the market would bear. But today, all we have is forever-home owners who are locked into a low-rate mortgage.

I will present evidence too. To demonstrate how potential home sellers are reacting to higher rates, consider the number of NSDCC listings that hit the market between September 1st and November 30th, which was when mortgage rates rose into the 6-plus range.  Once homeowners think it’s a bad market, they DON’T PANIC, and instead, they wait it out.

We have NEVER been in this environment before with so few choices.  The ultra-low inventory is going to continue into 2023 and even if the Fed eases up and mortgage rates end up in the 5s, potential sellers are going to wait until the coast is clear, and everyone is talking about bidding wars again. GUARANTEED!

As a result, home prices will remain elevated.