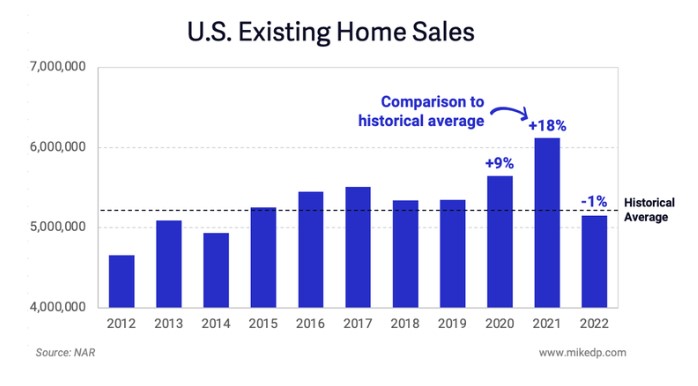 Thanks to Mike for pointing out that comparing 2022 data to last year isn’t really fair:

The pandemic years, especially 2021, were a strange aberration where everyone moved, house prices skyrocketed, and nearly every real estate business posted record revenues.

Why it matters: 2022 is constantly being compared to 2021, which was anything but normal, and year-over-year comparisons are painting a deeply negative picture.

Dig deeper: Assuming a fairly conservative 5.15 million existing home sales in 2022, the comparison to last year is a sobering 16 percent drop — but 2021 is an outlier, not a benchmark.  Compared to the historical average of the previous eight years (2012–2019), transaction volumes in 2022 would be down only 0.9 percent.

How are we doing around here?

Sales caught up quickly after the initial Covid swoon, so the 9-month count in 2020 looks fairly normal. The average for the first four years is 2,229 sales, and last year’s count was 14% higher.

This year’s count looks dire at -38% YoY, but the -29% below normal doesn’t look that great either. The pundits would say it’s a result of unaffordability, and yes, homes are much less affordable after the median sales price rises $520,000 in one year.

Sales are down because sellers are holding out on price – if they had to sell, they could.