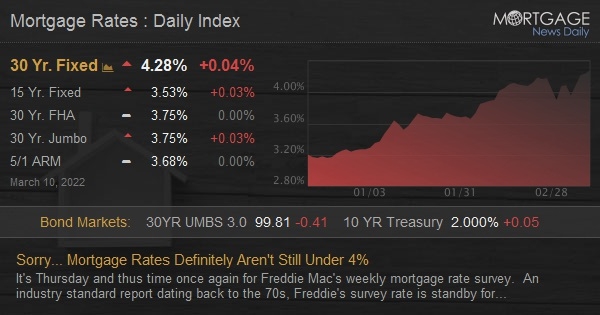 Rising rates may discourage the regular home buyers, but they aren’t the market-makers. All that matters is how many of the desperate-buyers-full-of-cash are left, and with the new listings trickling in, we only need a few!

It’s Thursday and thus time once again for Freddie Mac’s weekly mortgage rate survey.  An industry standard report dating back to the 70s, Freddie’s survey rate is standby for multiple news organizations to print their once-a-week mortgage rate color.  The net effect is the appearance of a deafening consensus in financial media regarding the going 30yr fixed rate.

The problem is that all of those sources are simply reporting Freddie’s survey headline.  The bigger problem is that Freddie’s survey headline often gives the wrong impression about where rates are and how they’ve been moving.  This is a logical consequence of the methodology.  Freddie sends the survey out on Monday, gets most of it’s responses on Mon/Tue, and then reports “this week’s mortgage rates” on Thursday.

The net effect is that the survey ends up comparing Mon/Tue rates to last week’s Mon/Tue rates.  Oftentimes, that doesn’t matter.  If rates aren’t moving very much from day to day, the numbers will be relatively accurate as well as the week-over-week change.  It’s when volatility surges that the mixed signals show up.  And volatility is surging!

Rates aren’t merely changing a lot from day to day, they’re changing multiple times per day in many recent occasions.  This week’s landscape was especially troublesome for the Freddie survey because Monday’s rates were, by far, the lowest.  In fact, after adjusting for the upfront points and the fact that many of Freddie’s respondents probably didn’t even look past last Friday’s rate offerings before responding, the 3.85% headline isn’t too terribly far from reality.

To be clear, rates are no longer anywhere close to that low.  The average lender is now definitively up and over 4.25% for the first time since early 2019.  In other words, today’s rates are the highest in almost 3 years.