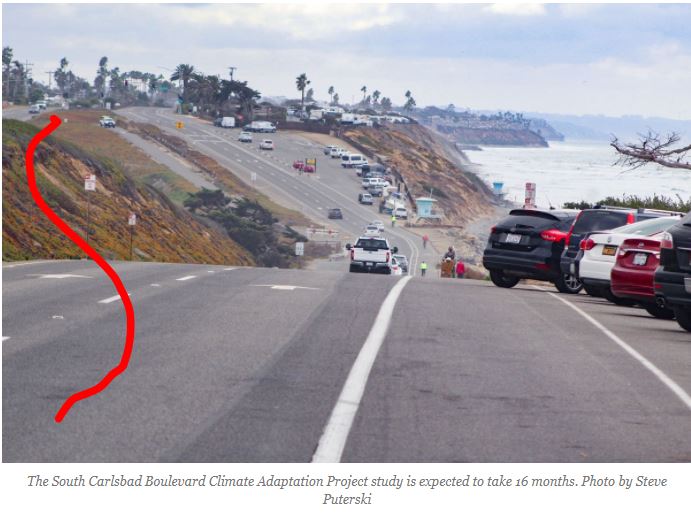 Heck, just follow my red line, and add some houses while you’re at it!

CARLSBAD — The city is preparing for sea-level rise by partnering with a prominent local research organization to perform a realignment study on a portion of Carlsbad Boulevard to help mitigate any future structural damage due to climate change.

The South Carlsbad Boulevard Climate Adaptation Project marks the first major review of the city’s infrastructure in relation to sea-level rise, according to Mike Grim, the city’s senior program manager.

The study is expected to take about 16 months and return to the council in Feb. 2023, according to Grim.

“It’s doing a little more detailed analysis of bluff erosion and flooding impacts would be due to sea-level rise or extreme storms,” Grim said. “And then analyzing the realignment of the boulevard and then what to do with that intervening space. We are going to move that as far east as we can.”

The Carlsbad City Council approved a $498,075 grant during its Sept. 14 meeting from the California State Coastal Conservancy for Scripps Institute of Oceanography to conduct studies on sea-level rise and how to move the road’s southbound lane eastward, away from the ocean, between Palomar Airport Road and Island Way.

The city will begin its public outreach to residents and businesses in January.

Fields said one deliverable is for a 30% engineering design for the roadway realignment with the southbound lane (closest to the coast) moving inland.

Adam Young, a project scientist with Scripps, said there are two goals for his portion of the project, analysis of historical data to assess coastal erosion and modeling of a future coastline.

Young said the erosion projections are currently underway and expected to be completed sometime next year. The project team will use a variety of models to form a consensus on predictions regarding how high sea-level rise may be and what impacts erosion may have west of Carlsbad Boulevard, also known as Coast Highway.

“We’re assessing the rates of erosion so they can design properly so the roadway is far enough back, so it won’t be threatened by erosion in the future,” he added. “I do think using a variety type of models help form the confidence in the outcome.”

The study will also other potential land uses, such as a 62-acre park with an open space the council discussed during its Oct. 12 meeting as part of the Local Coastal Program update.