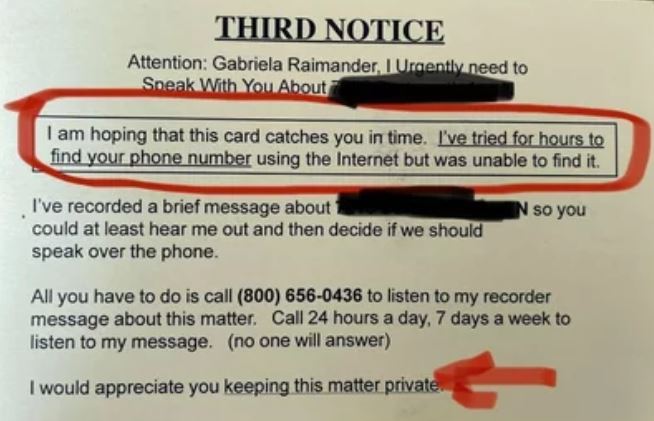 Excerpts from this article about real estate soliciting – it’s going to get crazier! Hat tip to just some guy:

Jennifer Folden-Nissen’s three-bedroom, Victorian-style house in Duluth, Ga., isn’t for sale. But that hasn’t stopped a guy calling himself Henry from phoning her at least once a week. She says the pitch is always the same: “I want to buy your house. I’m willing to pay cash. Today.”

Folden-Nissen works at the local fire department, and she’d call home and ask her husband to see if the guy was outside. But nobody ever was.  Then she started to get postcards from the same guy — with no stamp, so apparently hand-delivered — with photos of her own home on them.

“It was a little freaky because some of it was just like, OK, is the guy really outside?” she says. “And why is he taking pictures of my house if I haven’t given him the time of day?”

“They have just gotten increasingly worse in the past six months, six or seven calls every day,” says Lauren Barber, who lives in Columbus, Ohio.

“If you know anything about Columbus, it’s growing and it’s hot,” she says. “People want to live here.” Barber bought her house about 10 years ago for $155,000. She says now it’s worth more than twice that.

Investors can go on the internet and buy lists of phone numbers for people whose homes have risen in value, maybe more than the owners’ realize.

Barber works in human resources, so she says she has to answer her phone. “It could be one of our employees calling me with a question.” She says she tries to block the homebuyer calls, but they always seem to somehow call from a different local-looking number.

She says one of them even called her mother’s house, on purpose, to ask if Barber would sell.

“Like, really, you’re going to call my mom and ask her if I’m going to sell my house to you? It was just the most absurd and amazing thing,” she says. “But I told you no. Stop calling me. Don’t bother my mom.”