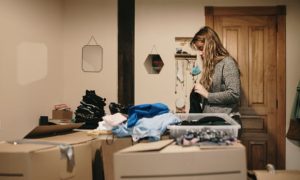 Record numbers of residents have been leaving California in recent years, but in 2020 the growth of remote work, the lure of cheaper housing and a summer of unprecedented wildfires has accelerated the trend. As a result, the moving business in San Francisco’s Bay Area is booming, but the surge has come with its own set of problems.

Moving trucks are hard to find, prices to get out of the Bay are being pushed sky-high, and the supply side of the market – with high starting costs and because movers are required to obtain state licenses – has been slow to respond.

The shortage has created openings for an underground moving economy complete with scammers who take advantage of desperate California escapees, left without easy options.

Moving companies across the Bay have said they were booked up months in advance through the summer. It continued through the autumn – in typical years, the industry sees a lull after kids start school. A spokesperson at Gentle Giant moving company says it performed three times the number of moves out of San Francisco in September 2020 than a year earlier.

Even at U-Haul stores – the rental truck retailer with the largest fleet across the US – trucks are in short supply. With so many trucks departing the Bay Area, the exodus has left an imbalance of returning vehicles. The shortage has sharply driven up truck prices for one-way trips out of town.

“Two households are moving out of California for every one moving in,” says Mark Perry, a professor of economics and finance at the University of Michigan who has been studying the US migration market over the past few years. “U-Haul is pricing it based on the imbalance they see and they now have a shortage of trucks in San Francisco.”

U-Haul changes truck prices regularly, but Perry has noted the pattern over time. Checking online recently, he noted that trucks going from Phoenix to San Francisco were only $311, but going the other direction it cost $2,500 – roughly eight times more. He checked cities in other top destinations for Californians, including Texas, Washington and Nevada, and found all outbound rates to be exponentially higher than inbound ones.

The high demand and high prices have created perfect market conditions for exploitation. Scammers are cashing in.

“There are hold-hostage cases where a mover will take possession of the belongings after agreeing to a price with the consumer, and then they will not give the belongings back unless the consumer pays well over and above what the agreed-to price was,” says Yeaphana La Marr, the acting chief of the California bureau of household goods and services, which regulates the moving industry. “Some just take the belongings and they are never seen again by the people who contracted for a move.”

The agency is also trying to crack down on new movers who are entering the booming market without licensing or insurance required by the state. Legitimate movers fill out an application, pass a test, undergo a background check and put up a $500 filing fee to obtain a license, and they have to prove they have the necessary resources and coverage to operate.

“Unlicensed activity is a major problem in the household moving industry and it creates a lot of consumer harm,” says La Marr. It is an accident-prone industry and customers could find themselves on the hook if they unknowingly hire a mover that doesn’t have liability insurance or workers’ compensation.

The underground moving economy is hard to track, but La Marr says the bureau does investigations based on tips from the public or other agencies, including local law enforcement. The bureau has seen a 74% surge in consumer complaints about movers since last year. “We don’t know whether Covid is a contributor or there are other factors, such as increased knowledge of the bureau,” she adds, explaining that her agency only assumed administration of moving industry regulations in 2018.

When an unauthorized mover is caught, the state will work with them to get licensed but some offenders are hit with citations, fines and, in some cases, jail time.

“For the more egregious violators, we would do a [district attorney] referral and that would be tried criminally,” La Marr says, adding that violators can be charged up to $10,000 per move. “The penalties are really high. So it is shocking how large the underground economy is.”