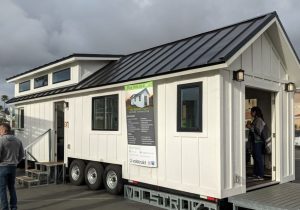 There should be some scrambling to purchase properties in the two highlighted areas below, but the cost for Mom & Pop to add an ADU is still a hurdle ($50,000 to $100,000 min).

San Diego further loosened rules for granny flat construction Tuesday, eliminating all parking requirements and allowing property owners to construct extra granny flats if they agree to rent restrictions on at least one of them.

Tuesday’s loosening of granny flat rules builds on recent state and city efforts to encourage construction of the homes, which city officials call the cheapest and fastest way to help solve the local housing affordability crisis.

The City Council unanimously approved the regulations as part of a package of reforms aimed at boosting housing construction.

Other updates encourage construction of more “micro” housing units, allow buildings to be three stories taller if all their units are rent-subsidized, and let housing intended for students to have more units than previously allowed.

“This isn’t the sexy, make-the-news kind of story, but at the end of the day it’s helping create more housing,” Councilman Scott Sherman said. “Hopefully we can start bringing down the cost of housing for residents.”

Mayor Kevin Faulconer, who has spearheaded dozens of housing revamps in recent years, said the new moves will make a difference.

“The changes we’re making now are going to speed up the development process, cut burdensome regulations, and make it easier to build units that San Diegans can actually afford,” he said.

On granny flats, which the city and state call “accessory dwelling units,” parking spaces will no longer be required.  San Diego has been requiring one parking space per new granny flat unless the unit is less than 500 square feet, in a historical area, within a residential parking district, or the granny flat is near a transit line or ride-sharing station.

On the bonus granny flats, property owners are eligible if they agree to make one of the granny flats they build rent-restricted for low-income residents for at least 15 years.

The rule change for micro housing units builds on 2018 city legislation that allowed developers to double the number of units in a project if they made the units smaller than usual – 400 square feet maximum.

The change approved Tuesday will create additional incentives based on height of the building and distance from the property line. City officials said the change would allow more projects to take advantage of the city’s micro unit incentives.

The new density bonus for projects with 100 percent rent-subsidized units builds on recent state legislation, AB 1763. That law allows a developer to double the size of a project if half the units are rent-subsidized.

San Diego will go beyond that. If all the units are rent-subsidized, the city will allow an unlimited number of units, and allow the height of the building to increase by three stories above what is allowed under current zoning. But the city’s change only applies in areas within a half-mile of an existing or planned transit line. In addition, 80 percent of the units must be for low-income or very-low-income residents, meaning a maximum 20 percent of the units can be for moderate-income residents.

On student housing, a new state law, SB 1227, allows developers to build 35 percent more units if their housing project is geared for students. The city has added two local incentives on top of that.

San Diego also increased the number of zones in the city where emergency shelters for homeless people can be located, a change required by recent state legislation.

The city will now allow shelters in all “community commercial” zones, which are essentially low-intensity commercial areas. Shelters were previously allowed only in mostly industrial areas, such as the Midway District near the sports arena.

Leaders of local development praised San Diego for being on the cutting edge of housing reforms.