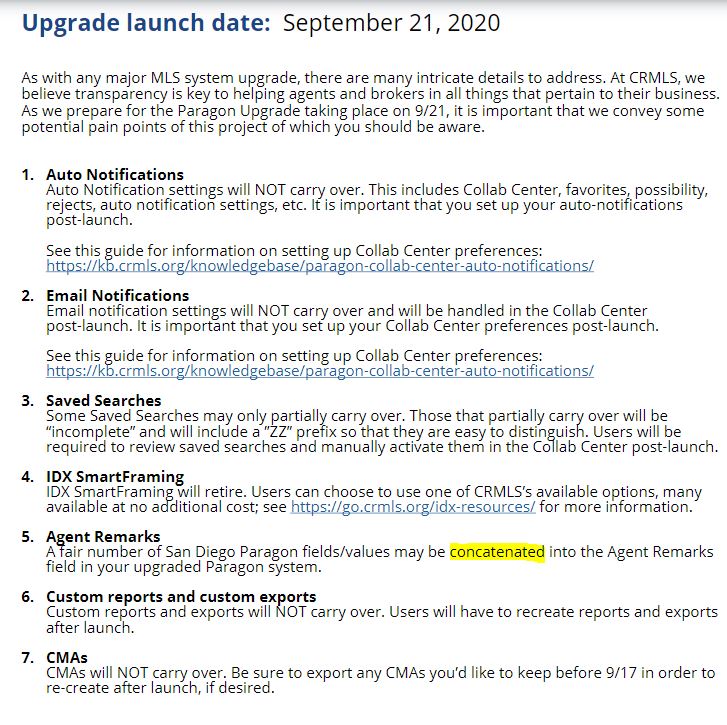 I spent 10-15 minutes watching the first zoom call by our MLS representatives yesterday who were informing us about the big MLS upgrade coming on September 21st.

But it turns out that the big ‘upgrade’ doesn’t mean we will get a shiny new car to replace the turd we’ve been driving around since the mid-90s.  Instead, they will tear our current system apart, and hope we can figure out how to put it back together – see the FAQs above.

Not only that, but the ‘upgrade’ will means from September 17-20 they will turn the MLS into ‘read-only’.  No new listings, no price reductions, no new pendings, etc.

Great – put us on an involuntary four-day vacation while you deconstruct the main tool we use to sell homes, and then make us put it back together by ourselves.

The real purpose for the ‘upgrade’ is so our MLS will better conform to RESO standards, which would make it easier to create a national MLS someday.  The only reason to have a national MLS was if you were going to have a search portal to go with it, and mount an attack on Zillow.

We did get more news about that today.

The Broker Public Portal announced they have hired a face of the project.  Inman News wrote a full article on him, where he said that he expects to overtake Zillow in the next two years.  Here’s the closing segment:

“When that shopper is ready to become a buyer, and wants real information about the property she’s interested in, she doesn’t get re-directed to some random agent who has probably never seen the house. She goes right to the agent who knows that property best. That’s better for the client, and better for the agent.”

Rather than spending hundreds of millions to advertise to consumers, the BPP will spread the word on Homesnap via agents, according to Rand.

“It’s a lot easier and cheaper to market to a million real estate agents than 250 million raw consumers. If we get the agents, they’ll bring the consumers,” he said.

He thinks consumers are going to leave Zillow because agents tell them to use Homesnap?  The Homesnap app would have to be a far-superior portal for that to happen, AND the Premier Agents who make a good living from advertising on Zillow would have to want a change.

Sounds far-fetched to me, especially within two years.