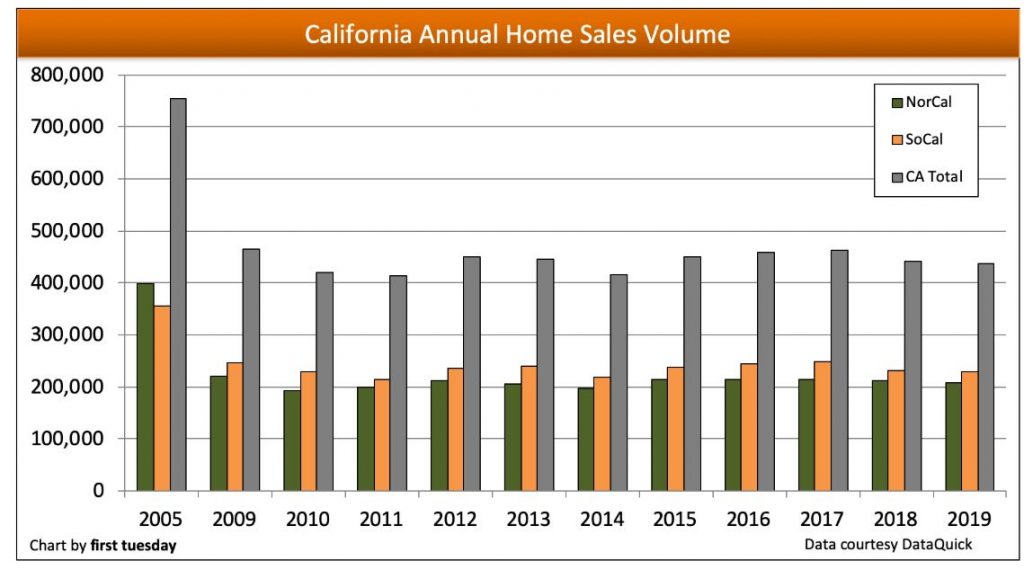 It was called ACA-11 while the legislators considered it, and the realtor-backed initiative is now Prop 19.  In our last installment, the legislative analysis included this gem:

Right now, around 80,000 homeowners who are over 55 move to different houses each year without receiving a property tax break. The measure would cause more people to sell their homes and buy different homes because it gives them a tax break to do so. The number of movers could increase by a few tens of thousands.

In the graph above, we see that there were 437,000 homes sales in California last year.  The analyst who prepares these studies is saying that 18% of all home sales are seniors buying up, or moving to a county that doesn’t allow for tax-basis transfers?  And if this measure passes, even more seniors will move just because of the tax break?

The analysis also includes this tax increase, but doesn’t mention the exclusion for those heirs who occupy the inherited home as their primary residence:

Under current law, between 60,000 and 80,000 inherited properties statewide are excluded from reassessment each year. Under the measure, these properties would instead be reassessed resulting in higher property tax payments. This, in turn, would increase property tax revenues for local governments.

Though the official state analysis seems far-fetched, just the appearance of being an assault on Prop 13 should be its undoing.

Hat tip to SM for sending this in from the Howard Jarvis Taxpayers Association that declares it to be just another political play to generate billions more in property-tax dollars:

The California Association of Realtors has pulled in the firefighters by adding that the excess tax revenues go towards fighting wildfires.  Will that be enough smoke & mirrors (pardon the pun) to persuade voters to change Prop 13? The last attempt to pass a similar initiative in 2018 never gained traction, and it’s doubtful that C.A.R. will spend enough advertising dollars to change voters’ minds this time.