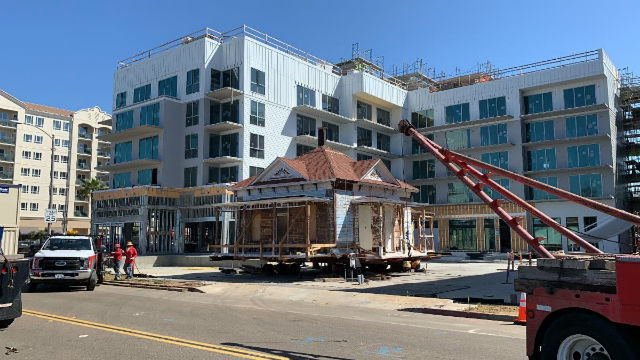 The Victorian cottage in Oceanside featured in the popular 1986 movie “Top Gun” was moved to a permanent new home at the Oceanside Beach Resort on Thursday.

Built in 1887 by Dr. Henry Graves, the home is one of the few “folk Victorian-style” homes in San Diego County. It featured in the movie as the oceanfront residence of Tom Cruise’s co-star Kelly McGillis.

S.D. Malkin Properties, which broke ground for the 384-room Oceanside Beach Resort in 2019, is spending nearly $1 million to relocate and restore the well-known cottage.

“By restoring this iconic house and having it as a key feature at the new Oceanside Beach Resort, we celebrate the future of Oceanside by referencing the past and preserving its history,” said Jeremy Cohen, director of S.D. Malkin Properties.

The house was moved from its original site after groundbreaking to allow construction of the resort, which is the largest oceanfront development in San Diego County in the past decade. Since then, the house has undergone extensive restoration, including structural improvements and cosmetic detailing.

Leslee Gaul, president and CEO of Visit Oceanside, said the home “has been a draw for visitors all over the world, so we couldn’t be more thrilled to have it restored and once again accessible to the public.”

Situated on 600 feet of beachfront at Mission Avenue and North Pacific Street, the Oceanside Beach Resort is set to open in the spring of 2021.