It wasn’t a surprise to hear that smaller no-name mortgage companies were retreating from the marketplace due to the extreme volatility.

The mortgage business has become dependent upon the Fed’s support to backstop the agency market (Fannie/Freddie), which leaves the non-conforming (jumbo) lenders wondering what they will do with their funded loans in the coming weeks – can they sell them to somebody?

It’s another story when one of the big banks who have been the foundation of the jumbo market, Wells Fargo, Bank of America, and Chase, are starting to quiver as well. Seen on the internet this morning:

Several correspondent investors are exiting the business or are no longer accepting new applications due to volatile market conditions. Additionally, many wholesale investors have now fully suspended operations or temporarily revised guidelines, and correspondent jumbo investors are beginning to tighten credit requirements. Investor availability and guidelines are expected to change often as market volatility continues.

The following transactions will be ineligible on all new locks, relocks and renegotiations:

You can’t blame Wells for being more conservative, but let’s hope they and other banks keep the jumbo loans coming.  The jumbo rates – which were about the same as agency rates a couple of weeks ago – have stayed since after the Fed bought enough agency MBS to bring down the conforming rates back into the mid-3s.  The jumbo rate is almost 1% higher: 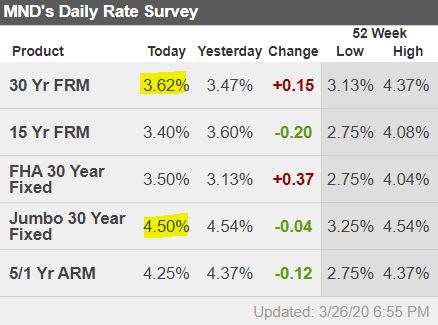