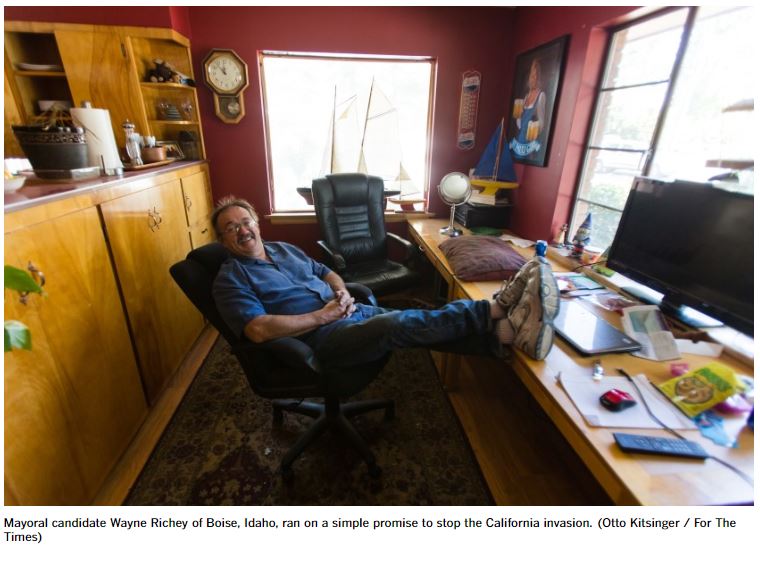 BOISE, Idaho — This city sure knows how to roll up the welcome mat — that is, if you happen to move here from California.

Just consider last week’s mayoral election. It was the most competitive race in recent memory, a referendum on growth in the rapidly expanding capital of Idaho. And candidate Wayne Richey ran on a very simple platform: Stop the California invasion.

His basic plan to fulfill that campaign promise? “Trash the place.”

Richey figured that would be the best way to keep deep-pocketed Golden Staters from moving to his leafy hometown. He blames them for pushing home prices and rents up so high that Boiseans can’t afford to live here on the meager wages most Idaho jobs pay.

At a candidate forum in late October, he had a terse answer for the question: “If you were king or queen for the day, what one thing would you do to improve Boise?”

“A $26-billion wall,” he said, laughing, drawing out each word for maximum emphasis. As in build one. Around Idaho.

California bashing is a cyclical sport with a long history in the heart of Idaho’s Treasure Valley. Growth spurts have more than doubled Boise’s population since the 1980 census. Four months before federal counters hit the streets here that year, a Washington Post headline crowed, “To Most Idahoans, A Plague of Locusts Is Californians.” 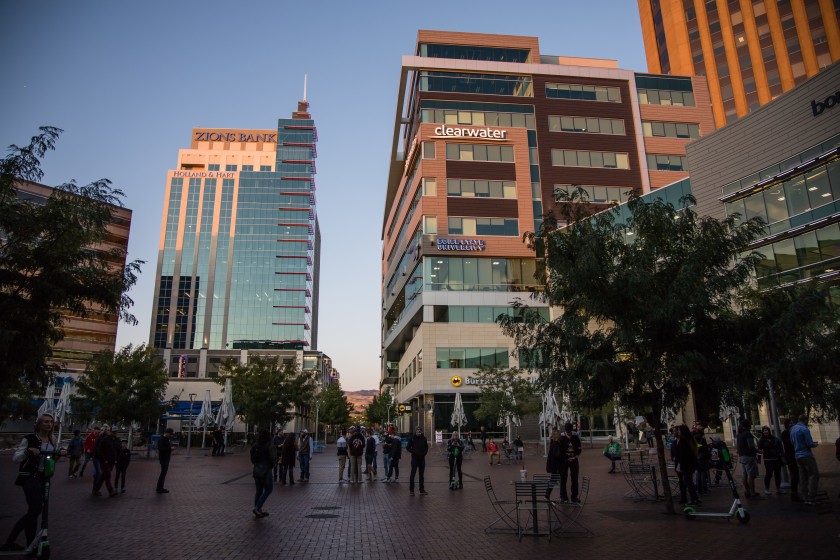 In this current wave, California concerns have made their way into a heated mayor’s race. They have taken up residence on Nextdoor social networks.

And they erupted into a recent tweet storm that swirled around two beloved institutions, Boise State University and football. The electronic uproar caused residents all the way up to Mayor David Bieter to defend their city’s welcoming nature and insist that they like Californians, really they do, despite evidence to the contrary.

The Twitter squall started in late September, when former Boise State University football player Tyler Rausa went out to his car one day. There he found a professionally printed card, white with an elegant charcoal gray and gold border. It had a nicely centered, two-line message in all capital letters.

GO BACK TO CALIFORNIA

WE DON’T WANT YOU HERE

He posted it online with a very short response: “Hmmmm didn’t think I’d ever find this on my car in Boise. #ThankYou.”

Rausa was a talented kicker for the Broncos in the 2015 and 2016 seasons. He scored 219 points for the team then. He is now an NFL free agent. He still lives in Boise. But he kept his California license plates.

The response to his tweet was swift, voluminous and mostly open-hearted. “I hope they are ashamed of themselves,” wrote @NitroJen. “Idaho: The PNW’s Mississippi,” posted @AbsoluteKit, referring to the Pacific Northwest. “Screw them!” @someone tweeted. “You are more than welcome here!”

Then Bieter chimed in. “@T_Rausa, I hope you take all of the positive comments you received here as the real spirit of Boise and #BoiseKind,” the mayor wrote. “We are glad you are here and part of our great community.”

One bit of advice Rausa got during the online fracas was that he should change those California plates — and fast. That’s been a longtime refrain from friendly Boiseans to their newest neighbors.

The Rev. Bill Roscoe, chief executive of the Boise Rescue Mission Ministries, heard it from his Realtor when he moved to Boise from Redding in 2002. He keeps a sign on his desk that says, “I am not from Idaho but I got here as fast as I could.”