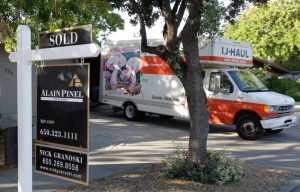 Here’s a less-hysterical article about people leaving California – it seems about 28% have been wanting to leave for years, and only 13% have done it. An excerpt:

Berkeley pollsters found 24% of voters had given serious consideration to moving out of California with another 28% giving “some consideration” to such a relocation.

The state’s high cost of living and its political divide were clearly on display in this survey.

Let’s remember, it’s easy to say you’ll leave, especially to a pollster. It’s another thing to pick up and go.

So how does California crankiness grade on a national scale? Sadly, there’s not a lot of comparable data.

Let’s not forget that on a national scale, the state has a young population. Young people move more frequently, but they are also the future.

Consider a 2015 national poll by Gallup that found 28% of California adults surveyed agreed to the statement “they would like to leave their state if they had the opportunity.”

But that level of unease was mid-range discontent on the countrywide scale: California tied with five states while 21 others had lower shares of residents pondering an out-of-state relocation.

Historically, a small slice of Californians move out of the state compared with the rest of the nation.

Census stats show 4.8 million Californians moving to other states from 2010 to 2017. Yes, that’s 13% of the state’s population in eight years — but it’s also the lowest share (yes, LOWEST!) of exits of any state and nearly half the nation’s 18% rate of state-to-state movers.

Plus, the five big metro areas with the largest increases in length of homeownership between 2019 and 2009 were from California: Ventura County, San Jose, Los Angeles-Orange County, Inland Empire and San Francisco.

Californians still give their state a high grade. The Berkeley study also replicated a long-running Field Poll question about Californians’ view on the state’s quality of life.

Pollsters found 50% of Californians thinking the state was “one of the best places to live” tying 2007 with the highest score since 2000.

And California looks dreamy to many Americans.

US News & World Report’s annual “best places” rankings include a survey of dream locations to live. Five California locations made the Top 25 this year: Salinas (No. 24), Santa Barbara (16), Los Angeles (11), San Diego (5), and San Francisco, in a four-way tie for No. 1.

Hat tip to CB Mark for sending in this article on Boise, and the California exodus:

Idaho’s capital—from the city of Boise itself to the surrounding towns that have shifted from farmers’ fields to subdivisions over the past few years—is in the midst of a building boom. While Boise’s economy has been attracting new residents, much of the boom is fueled by migration from others trying to escape expensive coastal cities out west. Even so, the specifics of these moves don’t map exactly onto the stories we tell about who is leaving the coasts and how they’re changing noncoastal cities.

It’s instructive to look past the construction and zero-in on the type of housing being built to get a better sense of what is driving this growth, according to Phil Mount, Boise’s regional realtors president. A lot of the new construction he’s seeing around towns like Eagle and East Boise could best be described as nice single-level homes—with a few added touches, including low-threshold doors that are easier for owners who are disabled, spacious hallways, wide showers, and maintenance-free features. These are easy-to-live-in homes in neighborhoods with clubhouses and walkable access to stores. They are perfect places for older, wealthier retirees to spend their golden years.

“I just had a client, a 70-year-old widow from Northern California, Darolene Mullin, who came out here because she didn’t like what was happening to her home, and the lifestyle here suited her,” he said. “She’s in the area affected by the blackouts (due to fears that downed power lines would spark wildfires), and just decided that Boise is where she’ll spend her retirement years. It’s so much easier here.”

In California, a significant number of older homeowners are hitting retirement. State residents over 65 years old made up 18 percent of the population, a group that grew by 3 percent in 2018 alone, and 80 percent of the baby boomers in the state own their homes. That’s a lot of potential for downsizing and moving out. California citizens aged 65 to 75 are also the most likely of any age group to own property. Some analysts have even said the rush of boomers downsizing will create a “shadow inventory” of housing that will help alleviate the great shortage of starter homes.

These homeowners are feeling an additional push to leave the state thanks to the recent tax reform and the SALT exemption repeal, which increases the tax bill for homeowners. According to Dan Walters, a researcher with the state think tank CALMatters, there’s been a rush of retirees or near-retirees making the move to neighboring low-tax states such as Arizona and Nevada. Researcher Joel Kotkin found that a majority of Californians expected to leave the state in the next 10 years.

These older former Californians have also zeroed in on Texas. According to the Economist, a quarter of those moving out of the Golden State between 2007 and 2016 have relocated to Texas. A city employee in Plano, Texas, who had been helping dozens of new arrivals apply for drivers’ licenses, joked that “Everyone is from California. Are they kicking y’all out?”

The main movers are middle class

But the scapegoating of rich Californians ignores many of the facts about who’s really moving. In a survey of economists taken by the San Diego Union-Tribune seeking insight into the state’s retirement climate, the consensus was that older and wealthier residents had more reasons to stay (and California has been a magnet for residents moving from similarly expensive states). Proposition 13, the state ballot measure from 1978 that froze property taxes for long-time homeowners, is a massive subsidy for the wealthy (it saved homeowners an estimated $7.4 billion last year alone).

The working middle class are “fleeing the state,” according to Kelly Cunningham of the San Diego Institute for Economic Research, due to the state’s “dysfunctional nature.” A large part of the problem is housing; per Zillow, the average house in California has risen from roughly $300,000 in 2012 to $550,000 today. Los Angeles, Riverside, and San Bernardino counties have seen massive outflow of residents over the last few years. California is becoming stratified, a statewide gentrification that is holding back economic growth and leaving the vaunted California lifestyle “available to an increasingly select few who can afford it.”

Public sector workers from California have long sought greener, cheaper pastures. According to a report by the Sacramento Bee, 15 percent of the 561,000 pensioners in the California Public Employees’ Retirement System live outside the state. Cops and firefighters have clustered in Grants Pass and Lake Havasu City, Arizona, and other state employees can be found in Nevada, Oregon, Washington, and Florida.

“Compared to California, Las Vegas was a no-brainer,” Joe Beck, a former Southern California school district maintenance administrator who moved to Las Vegas, told the Sacramento Bee. “I decided that if I could handle the heat three months out of the year, I needed to move to where my retirement check would be tax-free.”

Vegas, which is close enough for an afternoon jaunt back to Southern California, also offers plentiful sunshine, lots of activities for seniors, and the same single-family-home-style subdivisions that retirees had back home.

The national challenge of finding affordable housing is having a trickle-down effect everywhere. And if Boise is any indication, few cities are adequately preparing for shifting populations and new migrations across the country.