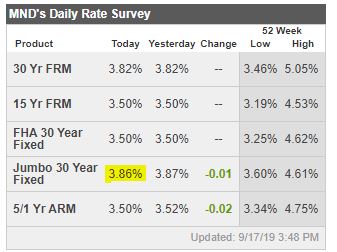 Hat tip to Matthew for a great piece on mortgage rates:

Mortgage rates have risen rather abruptly from their long term lows 2 weeks ago and are now at the highest levels in more than a month.  Fortunately, the average lender is still easily able to quote rates in the high 3% range, which is still a significant savings for anyone who bought or refi’d in 2018 and even the first part of 2019.

That’s great and all, but what have rates done for us lately?

More importantly, what are rates going to do in the future?

Unlike forecasting the weather, the more of an expert someone is in the mortgage world, their ability to predict the direction of rates doesn’t meaningfully diverge from the layperson’s best guess.  What we do know is that tomorrow’s Fed announcement is a big potential source of volatility, but NOT for the reasons most laypersons may assume!

I’m often asked if the Fed rate cut/hike will have an effect on mortgage rates.  I’m also often asked to reiterate the correct answer to that question which is almost always “NO!”

The Fed only meets to potentially change rates 8 times a year.  The bond market that underlies mortgage rates, however, can change 8 times in less than a second.  Markets have LONG since priced in the Fed’s likely course of action (which is currently a high probability for a rate cut).  If the Fed surprises markets and doesn’t cut rates, it will definitely cause some movement in financial markets, but there’s no telling where mortgage rates would be at the end of the day.

Part of the reason for that is the market’s bigger focus on the Fed’s updated forecasts.  In other words, the (probable) rate cut is old news and has already been accounted for in today’s mortgage rate landscape.  But if the Fed’s forecasts show deceleration in the pace of expected rate cuts versus the June forecasts, rates could rise.

A lot has happened since June, however, so it’s possible the forecasts will call for even lower rates over the next 3 years. Even if that happens, there’s still no telling what the reaction would be in longer-term rates like mortgages.  After all, more rate cuts in 2019/2020 could act to keep the economic expansion going, and that’s bad for rates, all other things being equal.

The bottom line is that the Fed announcement is a multifaceted event that can move markets in different ways for different reasons, expected or otherwise.  Investors burn the midnight oil trying to get ahead of the market reaction and surprises are still the rule.  The safest bet is to be prepared for a reaction in either direction as opposed to crossing fingers for rates to move lower.

Bonds continued to regain some of last week’s brutal losses today, and my pricing improved slightly.  We’ll take whatever gains we can get prior to tomorrow’s FOMC statement.  I don’t see us regaining our recent multi-year low rates anytime soon, so folks yearning for rates in low 3’s need to temper their expectations.  Nothing wrong with locking here. – Ted Rood, Senior Originator