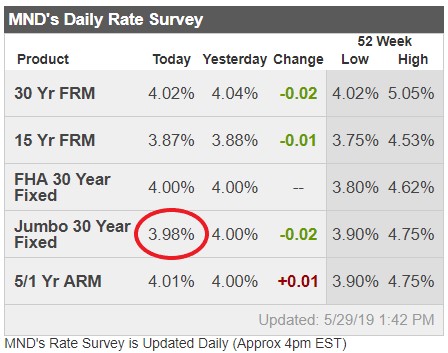 If you are thinking about selling your house this year, call me tonight!

Rates are idyllic, and so is the weather which makes for a great combo!

Mortgage rates fell again today, just barely inching to the lowest levels since early 2018.  Keep in mind, that factoid is based on an average of multiple lenders.  Some of them aren’t quite back to the low rates seen at the end of March.  Others had crossed that line several days ago.  Either way, the actual NOTE RATE at the top of the average rate quote would be the same then and now.  The EFFECTIVE RATE would be just slightly lower due to a small advantage in upfront lender costs.

Relative to market sentiment at the beginning of May, the last 3 weeks have been unexpected.  In other words, there was no obvious reason to expect or fear the sort of slide in stocks and yields that we’ve seen since then.  But of course, that’s just the sort of thing financial markets like to do!  If there’s one overarching reason for the move, it’s the trade war between the US and China.  Just when it seems the issue is put to bed, more drama unfolds.  In general, trade war drama damages the economic outlook and a weaker economy is generally good for rates.