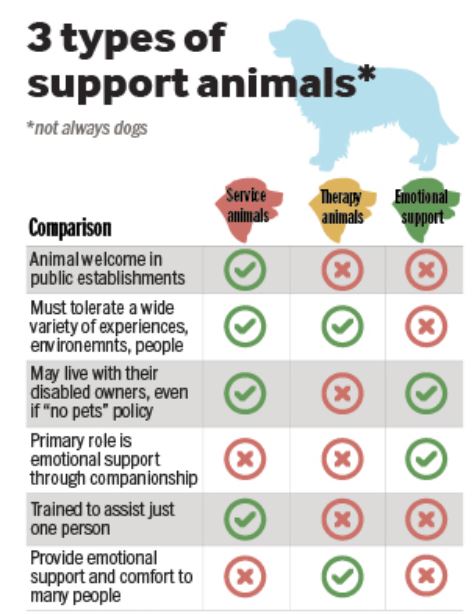 Landlords and support animals – what a topic!

Staff in public transportation companies and housing rental offices are increasingly finding themselves challenged to sort through which types of service or support animals must be allowed by law. According to these companies, some individuals are cheating by introducing ordinary pets as doctor-prescribed “emotional support” animals in order to bring them into housing where pets are banned or to avoid fees such as pet deposits, pet rent or travel costs.

“I can’t go 30 minutes any time I’m around landlords without someone bringing up assistance animals,” said Paul Smith, executive director of the Utah Apartment Association, which advocates for landlords. “That’s the No. 1 issue for landlords. Landlords want to accommodate people with disability, but want to cut down on fraud.”

To legally gain accommodation for an emotional support animal requires an “impairment that substantially limits one or more major life activities,” Smith said. “In addition, the animal has to be a medical necessity — it’s not just that having a cat makes me happy. Having the cat treats the medical condition. Our frustration is not that we don’t think there are people who genuinely need one. But under that definition, the animal has to be a medical necessity. We don’t think that definition is met most of the time.”

While landlords must trust that a letter from a doctor is valid, it’s an issue made more complicated by what Smith calls “online certification mills,” which sell letters prescribing an emotional support animal for a fee, no therapy needed.

The Deseret News decided to see how hard it would be to get an emotional support animal letter online without having a particular need (or even owning an animal). Reporter Erica Evans went after the cheapest option she could find easily: a website which offers airline and housing recommendation forms for $79.

The website advertises “Live and fly with your pet legally and hassle free,” and boasts 30,000 happy customers nationwide. She started filling out the form, but got interrupted after inputting only basic information, including her name and phone number. No worries; within a half hour the company called her, though she hadn’t completed the online intake.

She was connected first to a doctor in California, where the receptionist asked, “Are you calling for a medical marijuana card?” Evans clarified that she needed an emotional support animal letter. That doctor passed Evans’s case to another doctor, who identified himself as a cardiologist, internist and family doctor in Florida.

In an 11-minute conversation, the Florida doctor asked Evans about her mental state and how it interferes with daily life. He said his purpose was to learn whether she has a mental disorder that would allow her to qualify for an emotional support animal certificate.

Evans responded honestly that she has never been diagnosed with a mental or emotional disorder and has never seen a therapist or psychiatrist. She described how she feels when she is most anxious or sad and said her cat makes her feel better. The doctor asked Evans how long she has been having problems but did not ask how frequently she experiences symptoms she described, such as trouble falling asleep and difficulty working when she is anxious.

“I’m looking for more, to be honest,” the doctor eventually said. Then he listed issues that might qualify a person for an emotional support animal: panic attacks, PTSD, autism, brain damage, experience with sexual assault or not being able to hold a job or leave the house.

In response, Evans told him she didn’t want to exaggerate her symptoms but that she had been having “a really hard time” based on recent life events.

Finally, he said, “I think we can OK this,” and Evans received a PDF letter in her email that day.

Evans applied for and received a second letter signed by a licensed clinical social worker in New Mexico, a few hours after filling out a 10-minute multiple-choice questionnaire online and paying $84. The website asked questions such as “How often do you feel overwhelmed by current life circumstances?” and “How often do you feel depressed or saddened?” Once again, Evans answered based on her real experience, exaggerating only slightly.

Evans never talked to the social worker in New Mexico. But the letter she received said Evans has an “emotional and mental disability” and qualifies for protections under the Americans with Disabilities Act, the Fair Housing Act and the Rehabilitation Act.

Neither health provider responded to a request for comment on this story.