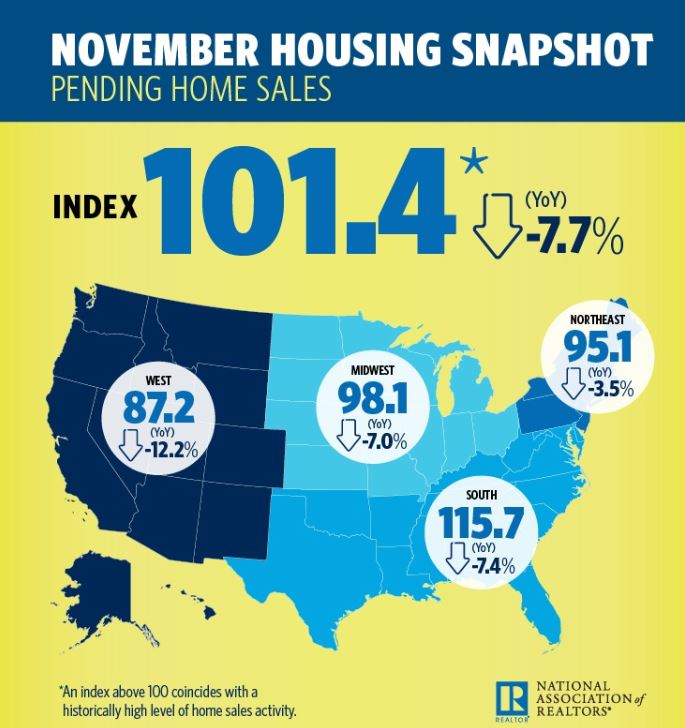 Contracts to buy previously owned homes fell unexpectedly in November, the National Association of Realtors said on Friday, the latest sign of weakness in the U.S. housing market.

The NAR’s pending home sales index decreased 0.7 percent from the prior month to 101.4. October’s index was unrevised.

Pending home contracts are seen as a forward-looking indicator of the health of the housing market because they become sales one to two months later.

Compared to one year ago, pending sales were down 7.7 percent in November, the eleventh straight year-over-year drop.

The housing market has been constrained by higher mortgage rates as well as land and labor shortages, which have led to tight inventory. Though house price inflation has slowed significantly, it continues to outpace wage growth, sidelining some first-time homebuyers.

The NAR previously reported that home resales rose in November, but recorded their biggest annual decline in 7-1/2 years.

Groundbreaking for new homes also rebounded in November, but completions on single-family homes fell for a third straight month to their lowest level in more than a year.

Lawrence Yun, the NAR’s chief economist, said in a statement on Friday that the pending home sales data was not yet reflecting recent favorable mortgage rate conditions.