Prop 5, the project of the California Association of Realtors, was soundly defeated – but it won’t be the last time we hear about the issue.  The supporters only spent half the money raised:

With 5 million ballots counted early Wednesday, Proposition 5 was behind 57 percent to 43 percent.

Under current law, seniors and near-seniors can transfer tax assessments if their new homes are worth the same or less than the ones they sell, and they can only do it only once. Current law also limits out-of-county transfers.

Proposition 5, backed by the California Association of Realtors, would have allowed over-55 homeowners to transfer their assessments to any new home — no matter what it costs — anywhere in the state and as many times as they wish.

It was a low-key campaign with high stakes.

“Today’s decisive defeat sends a strong message to the California Association of Realtors that voters won’t tolerate self-interested initiatives that attack the critical local services that strengthen our communities,” Graham Knaus, executive director of the California State Association of Counties, one of the main backers of the No on Prop 5 campaign, said late Tuesday.

The Legislative Analyst’s Office concluded that schools and local governments would each probably lose more than $100 million in property tax revenue a year initially and that, over time, those losses would reach about $1 billion a year for each. About 85,000 homeowners over 55 who move every year without the tax break would pay much less.

Current law requires the state to provide more funding to most schools to cover property tax losses. Not so for local governments.

The Realtors funded a consultant’s report that contended Proposition 5 would have much less impact on state and local governments, resulting in annual losses of $120 million to annual gains of $200 million.

Opponents challenged the assertion that Proposition 5 would spur construction and warned about a hit to public services.

As a result of Proposition 13 passed in 1978, a home is typically taxed at 1.1 percent of the purchase price and increases no more than 2 percent a year. Prices have risen much more, sticking many homeowners with much higher taxes when they move.

Supporters raised $13.2 million as of Oct. 23, mostly from the Realtors, whose benefit from sales commissions. But the campaign only spent about half of what it raised and didn’t engage in television advertising or direct mailers.

The Realtors recently filed notice with authorities that it would try again on the November 2020 ballot if Tuesday’s measure failed. Chris Carlisle, its legislative advocate, said it was “just to signal to our opponent we are not going away. If we lose this time, we will be back in 2020.”

If you are thinking of moving and want to go where the political climate is suitable for you, here’s how the country stacks up today (click to enlarge): 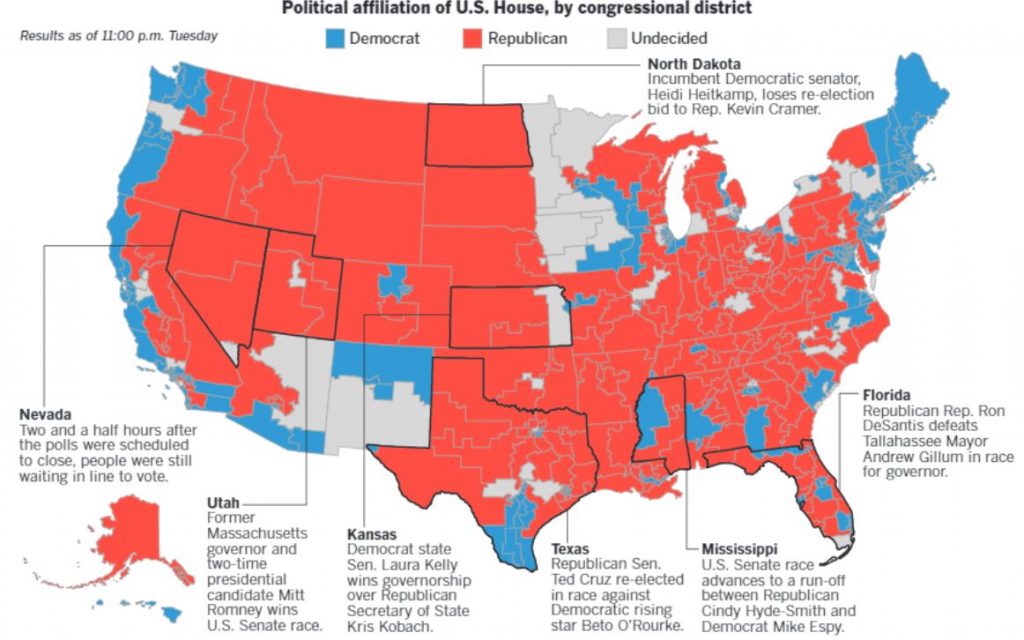