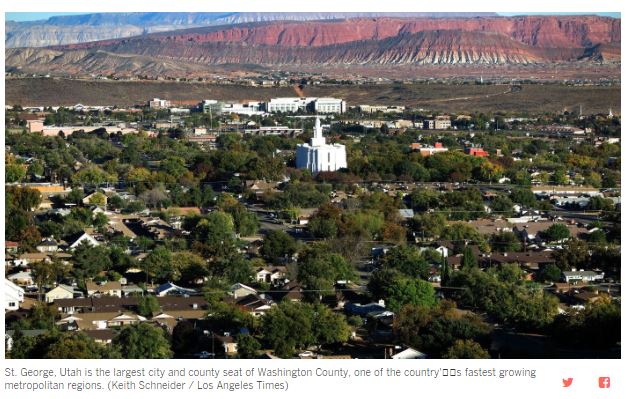 A report from the state Legislative Analyst’s Office earlier this year confirmed the obvious: People are leaving California. Between 2007 and 2016, we lost 6 million residents to domestic migration. Our population still grew overall, gracias to out-of-staters moving in and our ever-impressive (though declining) birthrate. But the fact remains that many people don’t think staying in California is worth the hassle anymore.

The drop was “low in historical terms,” according to the LAO, but the political right pounced on the findings as proof of the decline of Taxifornia. Conservative pundits and politicians have claimed for years that state policies push our best and brightest to move away; indeed, they hail those who leave as new pioneers who deserve applause for taking their dreams and tax dollars elsewhere.

Those eggheads, however, never seem to check in with the folks on the receiving end of the California exodus. I do, and I bring a message from them. If you’re thinking of decamping, please don’t.

This summer, I drove on what has become an increasingly popular corridor for California’s quitters: I-15 to I-70. It runs through Nevada, Arizona, Utah and Colorado — four of the seven most popular states for expat Golden Staters. Nearly half a million of them relocated to these four states in the past decade, according to the LAO. All along the way I saw the chaos that ex-Californians have wrought.

I sped through Las Vegas, where housing subdivisions now stretch out to the hills and canyons in all directions. A third of the driver’s licenses surrendered at Sin City’s DMV come from California. Henderson nowadays is basically Mission Viejo with worse heat but slightly less snobbery.

In Utah, I stopped for gas in St. George, which the Census Bureau says is the fastest growing metro area in the United States. A recent story in High Country News highlighted the tensions there as agricultural fields give way to strip malls and people worry whether there’s enough water to go around. In Cedar City, just 53 miles up I-15, a professor at Southern Utah University told me during a recent conference that the presenters warned everyone to prepare for a change in the fabric of civic life as the city of 30,000 faces record-breaking growth through 2030.

I spent a night in Grand Junction, Colo., where a commercial on the hotel TV urged a yes vote on Proposition 110, one of two measures that seeks to fund transportation projects. The ad blamed population growth for Colorado’s deteriorating and overcrowded roads, and wants out-of-staters to “pay their fair share to keep Colorado moving forward.” Prop. 110 is a sales tax that everyone would pay, but its supporters clearly think tapping into the animosity toward newcomers is a winning strategy.

The grand finale was Denver, which increasingly looks like downtown Los Angeles with its collection of repurposed old buildings, new cookie-cutter lofts and smog. A 2016 story in the alt-weekly Westword showed that between 2009 and 2013, Orange, San Diego and Los Angeles counties ranked among the top 10 counties that sent new residents to the Mile High City, with L.A. the leader.

Colorado, in fact, has changed so much that the number of people moving out of the Centennial State in 2017 hit a record high. The Denver Post quoted a millennial who came west as a college student in 2009 but is now planning to return to New Jersey. “The growth of our beautiful city has brought nothing but increased traffic, angry entitled transplants who have no respect, and a cost of living that is through the roof,” she said.

When people are moving back to Jersey, you know the Californians have caused serious problems.

I say phooey to people who want all of the easy and none of the hard of California and just give up and git. But California does owe it to lesser states to try to keep our residents here rather than having them trample over the West like a cattle drive.

Unfortunately, Gov. Jerry Brown was never able to fix our housing affordability issue, and I doubt Gavin Newsom will do much better. (Hey Gav, proposing to “work with our corporate partners to create workforce housing” smack of the days when robber barons paid in company scrip).

So friends and family will continue to rent U-Hauls and head out on that California quitter corridor. But amigos y familias, take it from your humble sojourner: The same problems that are driving you out of California will follow you to your new ’burbs. And your new neighbors won’t be happy about it.

So stay. Tough it out. Participate in the solution rather than flee.

Or if you must move, go to Texas. At least California colonialism can achieve something worthwhile there.