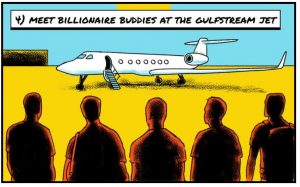 We’ve been exploring other towns around the West as alternatives for San Diegans who want to downsize.  Heck, let’s pick it up a notch!

Years of doomsday talk at Silicon Valley dinner parties has turned to action.

In recent months, two 150-ton survival bunkers journeyed by land and sea from a Texas warehouse to the shores of New Zealand, where they’re buried 11 feet underground.

Seven Silicon Valley entrepreneurs have purchased bunkers from Rising S Co. and planted them in New Zealand in the past two years, said Gary Lynch, the manufacturer’s general manager. At the first sign of an apocalypse — nuclear war, a killer germ, a French Revolution-style uprising targeting the 1 percent — the Californians plan to hop on a private jet and hunker down, he said.

“New Zealand is an enemy of no one,” Lynch said in an interview from his office in Murchison, Texas, southeast of Dallas. “It’s not a nuclear target. It’s not a target for war. It’s a place where people seek refuge.”

The remote island nation, clinging to the southern part of the globe 2,500 miles off Australia’s coast, has 4.8 million people and six times as many sheep. It has a reputation for natural beauty, easy networking, low-key politicians who bike to work, and rental prices half those of the San Francisco Bay Area. That makes it an increasingly popular destination not only for those fretting about impending dystopia, but for tech entrepreneurs seeking incubators for nurturing startups.

“It’s become one of the places for people in Silicon Valley, mostly because it’s not like Silicon Valley at all,” said Reggie Luedtke, an American biomedical engineer who’s moving to New Zealand in October for the Sir Edmund Hillary Fellowship, a program created to lure tech innovators.