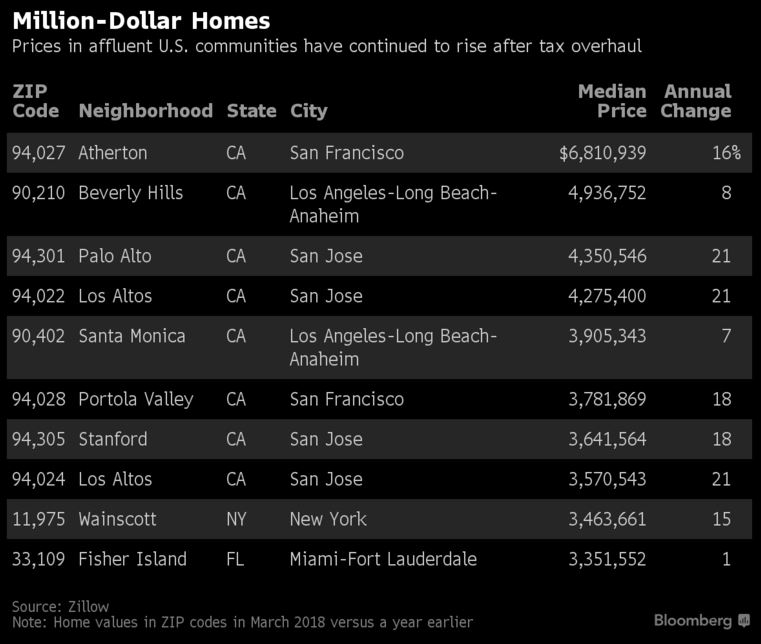 Here is where Yun replied earlier about their mistaken analysis:

Adam Blaylock was pretty sure he overpriced his Santa Clara, California, home by offering it in February for $1.48 million, since tax deduction changes would keep buyers away. But within a week, the 1,280-square-foot ranch-style house was in contract for $155,000 above asking.

The $1.5 trillion tax overhaul President Donald Trump signed in December capped mortgage-interest deductions on loans up to $750,000, down from the prior limit of $1 million. It also set a $10,000 maximum for state and local tax deductions, which were previously unlimited. Those provisions prompted one of the most powerful lobbying groups — the National Association of Realtors — to warn that home prices in some high-end markets would tank.

So far though, those areas have proven to be resilient. There are 308 U.S. ZIP codes that have homes with median values in excess of $1 million — more than 92 percent of them saw their median home prices increase in March from a year earlier, according to data from online real estate database Zillow.

“We are seeing the opposite of what was expected,” said Aaron Terrazas, senior economist at Zillow. “We have certainly not seen the doomsday predictions play out.”

Median home values nationally rose 8 percent in March compared with a year earlier, while neighborhoods of San Francisco and San Jose, California, have increased more than 25 percent. Prices in affluent areas in Delaware and New York, such as the Hamptons, also surged more than 20 percent.

NAR said in January “high cost, higher tax areas” would likely see price declines as a result of the tax changes. Specifically, the group forecast a 6.2 percent dip in New Jersey and declines of 4.8 percent in Washington D.C. and New York. Nationwide, NAR said it expected home prices to rise between 1 percent and 3 percent in 2018.

The Realtors weren’t alone in their grim projections. Sixty-three percent of economists surveyed by Bloomberg in November predicted reduced demand for home purchases.

The outlook has improved since then.

NAR Chief Economist Lawrence Yun said the group is now predicting a 4 percent gain in home prices across the country in 2018. While some taxpayers in California, a high-tax state with high home prices, may face increased tax burdens, that’s not damping interest in homes, he said.

There’s “consistent multiple bidding for $1 million homes after the tax reform,” he said.

Yun says NAR expected a big decline in prices based on earlier iterations of the tax overhaul. In addition, home prices have been supported due to a persistent housing shortage, he said.