This week at SANDAG (the county’s regional transportation board), we heard for the first time the amount of housing the state is proposing for our county in the next eight-year housing cycle. I hope you’re sitting down – it’s 21,000 new homes annually, which is more than three times the 7,000 homes that San Diego County is currently producing each year.

The total number countywide is 171,685 housing units for the 2021-2028 housing cycle. Each city’s allotment from the California Department of Housing and Community Development (HCD) won’t be determined until 2019, as the proposed methodologies are still in draft form. Once SANDAG assigns Encinitas our new housing numbers, scheduled for October of 2019, Encinitas will have 18 months to update our housing plan for state approval.

To recap, here’s the process: the state assigns the number of homes to the county, the county divides that number of homes among all 18 cities and the unincorporated area using a complex formula and then each city is required to put together a plan that hits those numbers, and the plan heads back to the state for approval.

These increasingly onerous housing mandates can seem unrelated to reality. Driving around the county, we all notice lots of new homes constantly being built. The idea of tripling that just doesn’t seem realistic. Furthermore, the most common feedback I hear from constituents is concern about the time they spend sitting in traffic, which is inevitably lengthened by adding more homes with more cars. 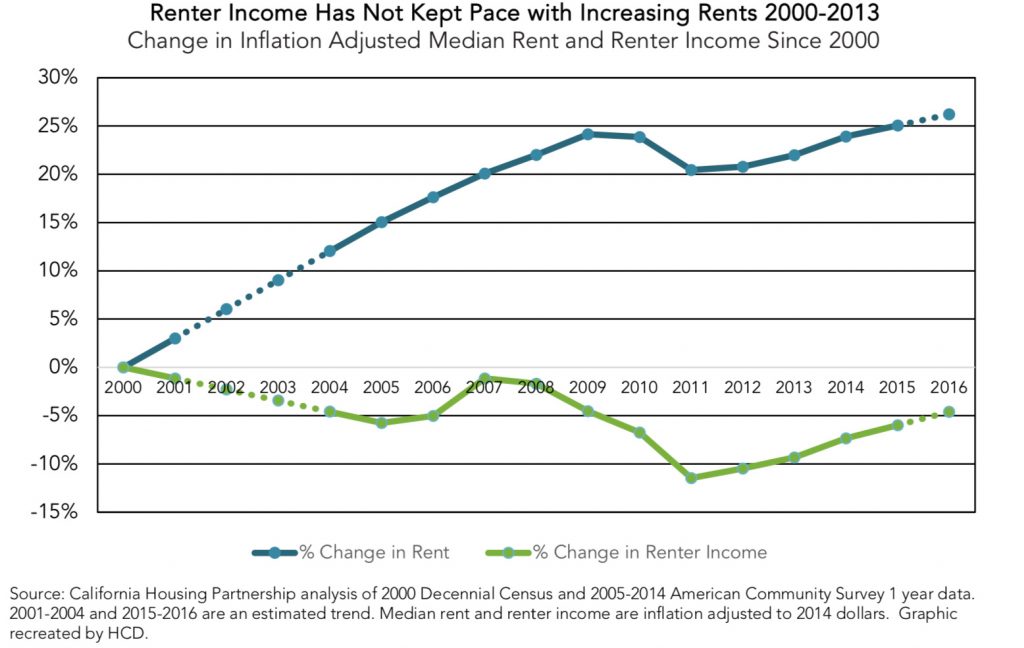 Despite this on-the-ground reality, housing policy discussions take place in a seemingly alternative universe, where growth forecasts indicate that cities aren’t even close to keeping up with demand. This demand is based on “housing formation” trends, the amount of “overcrowding” within existing homes, birth rates, projections of housing loss, and anticipated new jobs in the county. These factors all drive the need for more housing. And then you look at the reality that rental increases are far outpacing the income of those who rent (see the chart above) and the supply problem seems obvious.

HCD’s presentation at SANDAG last Friday elicited anger and disbelief from several San Diego County mayors. Encinitas has been in the trenches with our housing battles much longer than some other cities. It’s clear to me that while some leaders are unhappy about current housing laws, new laws on the horizon from state legislators will be substantially more burdensome.

One proposed housing law, for example, would force cities to allow development up to eight stories near transit centers – something that I find completely unacceptable. The city opposes this bill.

Here’s a KPBS story that does a great job of highlighting the tension between state housing goals and cities’ desires for local control.

So we find ourselves in a challenging predicament.

I’m trying to do the best possible job navigating the housing realities facing us in Encinitas. Toward that goal, this last week we had a housing workshop ably organized by our former deputy mayor Lisa Shaffer to discuss updating the city’s long stalled “inclusionary” housing ordinance, which is the amount of affordable housing that developers are required to build when they build market rate projects. Check out the Encinitas Advocate story for more information on this key piece of the housing puzzle.

My approach involves several facets – helping guide the city toward updating policies such as the inclusionary ordinance, incentivizing more accessory units and simultaneously making sure we count every single granny flat that comes online, focusing on housing development in Encinitas that results in housing credit (rather than development that gives us no credit), and most importantly, choosing the sites required for upzoning to get us out of the penalty box, end the lawsuits based on violations from previous housing cycles and produce more affordable housing.

Creating and implementing housing policy is painful and exhausting in Encinitas but we press forward, doing our level best with all available tools and strategies.

More on the 89 acres they have identified as possibilities: