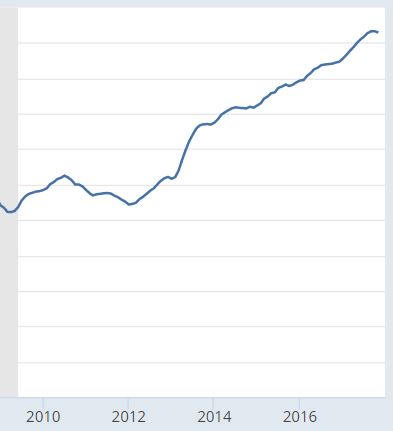 Last month, the initial reading of the San Diego Case-Shiller Index was flat, and now they adjusted it to a minor difference (-0.01%) from the previous month.  Today’s reading (for November) dropped even more (though the seasonally-adjusted rose +0.03%):

In spite of the blip, David Blitzer includes San Diego in his happy talk, and also mentions that demand is not the primary factor in rising home prices, which makes you think he’s never been out looking at open houses on the weekend – at least not around San Diego:

“Home prices continue to rise three times faster than the rate of inflation,” says David M. Blitzer, Managing Director and Chairman of the Index Committee at S&P Dow Jones Indices. “The S&P CoreLogic Case-Shiller National Index year-over-year increases have been 5% or more for 16 months; the 20-City index has climbed at this pace for 28 months.

From 2010 to the latest month of data, the construction of single family homes slowed, with single family home starts averaging 632,000 annually. This is less than the annual rate during the 2007-2009 financial crisis of 698,000, which is far less than the long-term average of slightly more than one million annually from 1959 to 2000 and 1.5 million during the 2001-2006 boom years. Without more supply, home prices may continue to substantially outpace inflation.”

“Looking across the 20 cities covered here, those that enjoyed the fastest price increases before the 2007-2009 financial crisis are again among those cities experiencing the largest gains. San Diego, Los Angeles, Miami and Las Vegas, price leaders in the boom before the crisis, are again seeing strong price gains. They have been joined by three cities where prices were above average during the financial crisis and continue to rise rapidly – Dallas, Portland OR, and Seattle.”