In spite of the hysterics presented by those with an agenda, it turns out the tax reform might not be as bad for housing as they thought – at least for those who make less than $20 million per year.  From HW:

For the most part, the latest tax reform will boost the average paycheck and do little to harm the housing market.

However, according to two recent expert reports, the devil is in the details.

Thomas Torgerson, co-head of Sovereign Ratings at ratings agency DBRS, said that for most households, tax reform should only have a marginal effect.

“Even in the more expensive metropolitan areas, DBRS estimates that most households with taxable income of less than $400k will see either minimal change or an increase in disposable income,” he wrote in a report today.

“Households with taxable incomes above $400k are likely to experience a decrease in disposable income, though the effects may be muted for households that are already subject to the Alternative Minimum Tax,” he added.

However, things change slightly in areas with higher than average state and local taxes, as well as the more expensive metros in the nation right now. The law caps SALT tax deductions at $10,000, so it’s possible some homeowners may need to move to more affordable areas.

Real estate valuation and data analytics service HouseCanary will soon release the following report: “Will tax reform change your housing plans? Hyper local analysis tells the tale” And in that report, provided early for the benefit of HousingWire’s readers, analysts at HouseCanary dug through mortgages from 2017 between $750,000 to $1 million, to see how many current households would be impacted by the new tax law.

According to the Torgerson DBRS report, disposable income is most likely to decline in higher income households with incomes above $400k and particularly above taxable incomes of $1 million, where lower tax rates are more than offset by the expected increase in taxable income due to the loss of SALT deductions.

Moreover, many of these households are presently subject to the Alternative Minimum Tax.

If the deductibility of SALT is already effectively limited due to AMT, the changes will have less of an adverse impact on disposable income for some of these higher income households. Furthermore, many of these same households should benefit financially from corporate tax changes, either as owners of a pass-through business or simply due to gains already reflected in their stock portfolios.” 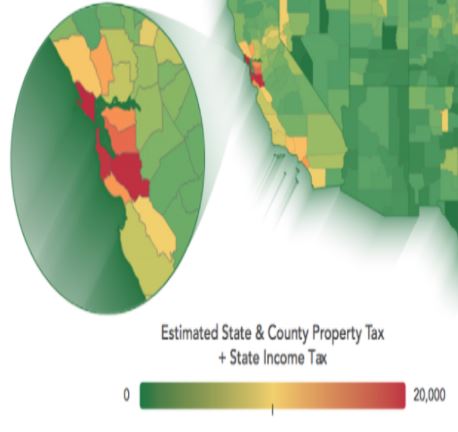