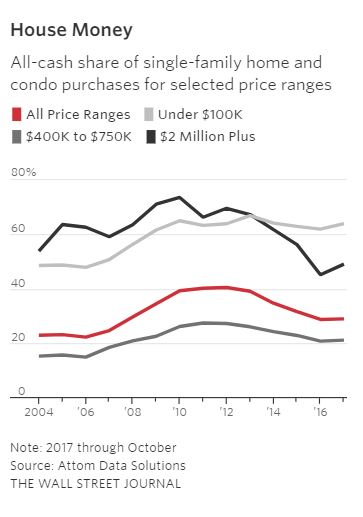 For those who might have seen this article and worried about competing with cash buyers, there hasn’t been much difference around here lately.

Meagan Freeman and her boyfriend have been looking for a midprice house in the Seattle area for six months but keep running into a hurdle: cash buyers swooping in and snatching up their properties.

It has happened three times, she said, most recently two weeks ago. The couple bid on a home in an unfashionable suburb they believed was a sure bet in the midst of a dreary Seattle November, when the market typically is slow.

Instead, the 27-year old said, a cash buyer won out yet again.

“It is definitely discouraging,” she said.

Five years after the housing market hit rock bottom, mortgage credit is finally returning to the healthy levels of the early 2000s, before the boom-bust cycle began. But all-cash deals remain well above normal levels, even as prices in many markets have pushed to record highs.

In all, 28.8% of U.S. home sales this year have been all-cash transactions, according to Attom Data Solutions, a data provider. That was down from the peak of more than 40% in 2011 and 2012, when investors were buying homes at a furious pace to turn into rentals. But the percentage of cash deals stands much higher than the 20% or so common in the early 2000s, and it has edged up from 28.6% last year, according to Attom.