Multi-Gen On The Rise 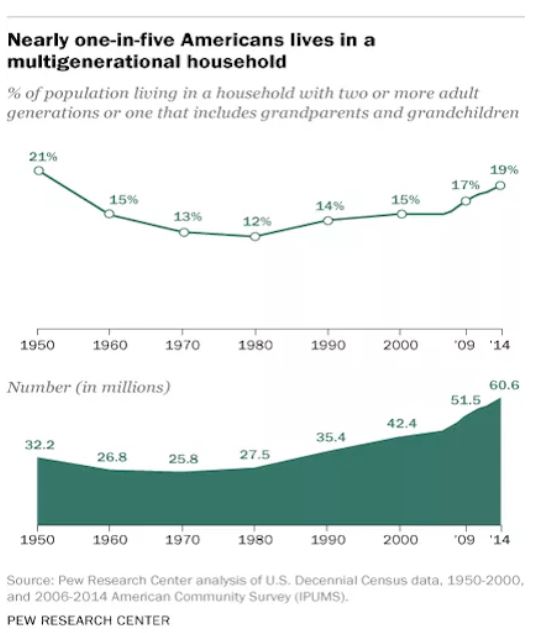 If you look at the new homes being built around here, you’d think multi-generational living was the builders’ primary target!

Donna Butts remembers one of the moments that sold her on the idea that there was a sustained rise in the number of multigenerational households. As executive director of Generations United, a nonprofit that promotes intergenerational living, she was called to do an interview on the topic for a Louisiana radio station a few years ago. The host seemed wedded to stereotypes: He’d never want his mother-in-law to move in, since she’d be intrusive and annoying, and adult kids living with their parents were strictly a sign of spoiled millennials.

He was convinced, that is, until he opened the phone lines.

“So, he starts taking calls and everyone has a great story about living with a grandparents or a child under the same roof, and how it’s made their lives better,” Butts says, laughing. “At one point, seeming desperate to prove his point, he asks a guy point blank if having his parent live with his family harms his love life. He just replied, ‘Well, now I have a live-in babysitter, so no.’”

Butts says that this way of thinking—what she calls the ‘John Wayne, go-it-alone mentality’—is withering in the United States. Multigenerational living, when more than one generation lives under one roof (not counting young children or teens), has hit record levels in the U.S. In 2014, according to Pew Research Center data, 60.6 million people, or 19 percent of the U.S. population, lived in multigenerational homes, including 26.9 million three-generation households.