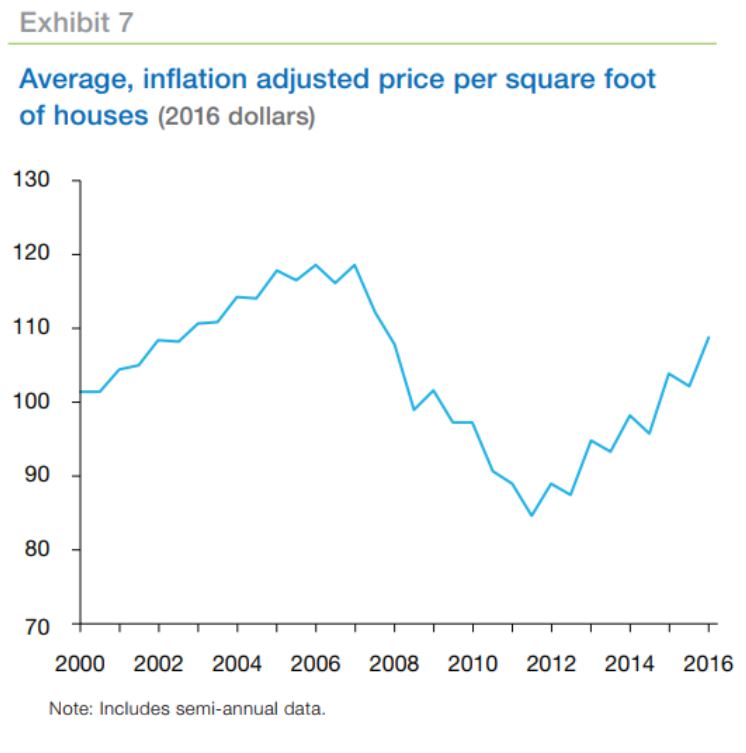 Someone must have passed a law; if it is November, you must publish something debunking bubbles.  The saturation point is near, but the latest contribution, from Freddie Mac’s Chief Economist Sean Becketti, provides a better (and much longer) analysis than most, so we will attempt to summarize his arguments as to why, despite rapidly rising home prices, we aren’t in a bubble.  Or as he says, “Not yet.”

The concern, he says, is understandable. Scars remain from the last bubble and there are plenty of warning signs regarding a new one:

It is difficult to spot a bubble before it bursts, but Becketti says there are three defining characteristics.  First, they are fueled by self-fulfilling predictions, i.e. prices rise simply because people expect them to. Nobel Laureate Robert Shiller called them “a kind of social epidemic” where price increases generate enthusiasm among investors, who then bid prices higher. The feedback continues until prices get too high, and the bubble bursts.

That is the second defining feature of bubbles, they do indeed burst. Not just correct, a normal part of the ups and downs of asset prices, but crash, reflecting a sudden realization that prices have become unsupportable.

The third defining feature is the central role easy credit plays in their growth.  When lenders begin to believe that price increases can go on forever, they grow less concerned about whether borrowers can repay the loan.  Bubbles collapse when lenders finally get worried and restrict riskier types of credit. Paradoxically, Becketti says, in the last decade lenders restricted credit, thus pricking the housing bubble and triggering the burst they were trying to avoid.

Hunting for bubbles is problematic.  Since prices might make a soft landing, it is tempting to monitor conditions a bit longer rather than act.  Identifying a bubble can spook people and trigger a crash that didn’t need to happen. Becketti admits that Freddie Mac is “stuck.” A potentially-destructive house price bubble “is one of the key risks we have to manage as best we can.”

The company has talked before about its two-part approach to identifying bubbles, first by comparing the current median house price to the median income (PTI) ratio to a historical norm of 3.5. They have found a national PTI above 4.1 is unusual enough to merit further analysis. It broke through that outlier in 2004, started to collapse in 2006, hitting bottom at 3.3 in 2011. It is currently approaching, but is still under the 4.1 threshold. Because bubbles can be local or regional, Freddie Mac also tracks the PTI ratios for the 50 largest metro areas and as noted earlier, 17 are currently a cause for concern. 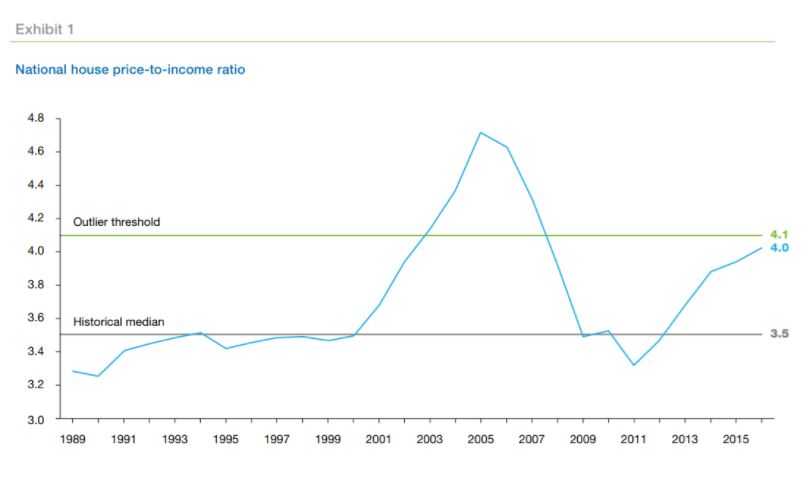 The inventory shortage is strong evidence against a price bubble and the slow rate of increase in construction suggests any eventual price adjustment will be gradual rather than a collapse.

A second piece of evidence is a bubbles’ reliance on easy credit. Freddie Mac looks for signs of credit deterioration. Increasing delinquencies and defaults tend to appear very late in a bubble’s life, so it isn’t surprising that the company’s book of business “has exhibited stellar credit performance to date.”

A much earlier sign is an increase in leverage; declining home equity. But the reverse is currently the case.  While house prices have risen rapidly since 2001, outstanding mortgage debt has barely budged. “Homeowners, at least in aggregate, are not funding a spending spree with the equity in their homes.”

So far, no sign of an imminent bubble, however there are those fast-rising home prices. Becketti says maybe they are looking in the wrong places for evidence. The national PTI ratio provided plenty of early warning about the last bubble, enough to have taken corrective action before It burst. But one possible warning sign isn’t enough, confirming evidence is needed.