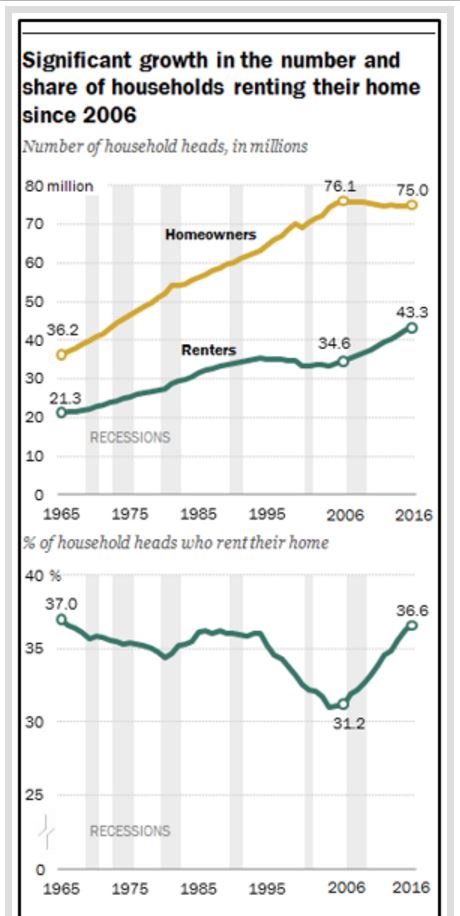 Hat tip to Carlsbad Mark for sending in this article!

More Americans are renting their homes than at any point since 1965, according to a new study by the Pew Research Center.

The total number of households in the U.S. grew by 7.6 million between 2006 and 2016.  But over the same decade, the number of American households living in a home they own remained essentially unchanged.

And that figure continues to rise …

I believe the root of the rising rental rates is economic hardship.

Only a small percentage of people who rent do so voluntarily. Most get pushed into renting because of financial circumstances.

When Pew surveyors asked renters why they rent, a whopping 65% cited financial circumstances. Only 32% said they rented as a matter of choice.

The three largest groups of traditional renters — young adults, blacks and Hispanics — are still the most likely to rent.

Worse yet, there is a large contingent of Millennials who aren’t even renting.

The “Basement Generation” makes a sad testament about the state of our economy.

But I place most of the blame at the feet of Mr. Magoo (Ben Bernanke) and Mrs. Magoo (Janet Yellen).

Their ridiculously nearsighted, low-interest-rate policies have made it impossible for millions of Americans to afford a home.