by Jim the Realtor | May 22, 2017 | Foreclosures, Jim's Take on the Market, No-Foreclosure as Banking Policy | 5 comments

It’s been well-documented that Ben Bernanke and others told mortgage lenders in 2011 to not do anything to disrupt the economy, which was gov-speak for lay off the foreclosures.

Kamala Harris virtually outlawed foreclosures in California with the Homeowners’ Bill of Rights.  Lenders now have to offer a loan modification first to anyone in default, and it seems that you have to really not want your house to get foreclosed these days.

Here’s a borrower who has been in foreclosure since 2011, and by the looks of how the loan balance has risen, the neg-am has been accuring AND they haven’t made a payment.  The balance on the first mortgage has gone up $489,860! 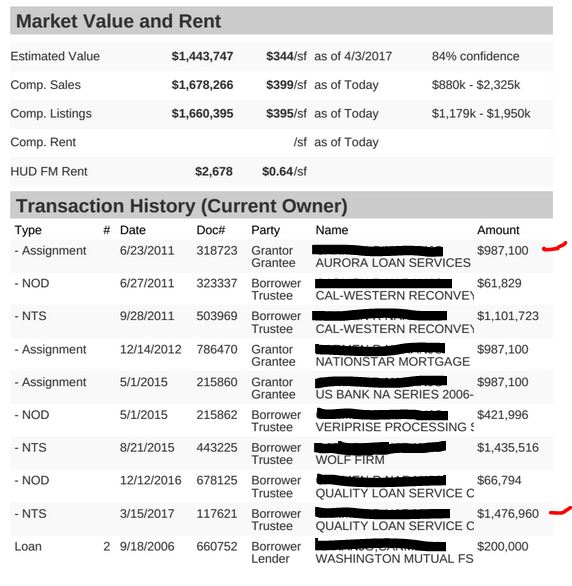 I just received notice that the foreclosure process just got CANCELLED too.  Either the lender gave him a loan-mod, or they gave up altogether?

The lenders might foreclose if there is enough equity that they won’t lose money.  If it’s close, they let it ride, and hope some payments trickle in.