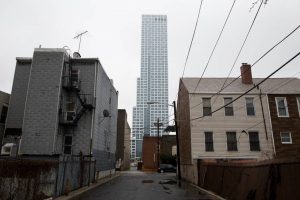 In response to complaints, the Jersey City Council unanimously passed a resolution creating an anti-solicitation city program referred to as a “No Knock” registry. Residents that sign up will receive “No Knock” decals for their front doors, and violators who continue to inquire at those homes can be fined up to $2,000 and sentenced to 90 days of community service.

“It’s something that we want to address and do it in a proactive way that builds community as opposed to creating conflict,” said Council President Rolando Lavarro.

The population of Jersey City, the state’s second-largest municipality, grew 6.7% between 2010 and 2015, according to the U.S. Census.

Amid the rapid residential development, longtime homeowners say that persistent offers from real-estate investors and developers have at times escalated to the point of harassment.

Assunta Folcarelli, a crossing guard who has owned her Jersey City home for 35 years, said realtors started calling her six years ago asking to buy her home. She has repeatedly declined but said solicitors continue to call, show up at her door and send her letters.

Michael Griffin, a lifelong Jersey City resident and local activist, supported the registry’s creation but said the city needs to do more to protect vulnerable homeowners from developers. Mr. Griffin said the city needs to educate residents about cash offers, including in several neighborhoods where many homeowners live at or below the poverty line and the old Victorian and brownstone homes are attractive to developers, he said.

“Not too many people in my community have seen that much money at one time,” Mr. Griffin said. “It may look like a sweet deal to them, but they might not be realizing the taxes involved when you take a lump sum of cash like that, or not thinking what their next move might be. Will you be able to sustain yourself just by renting? Rents in Jersey City are high.”