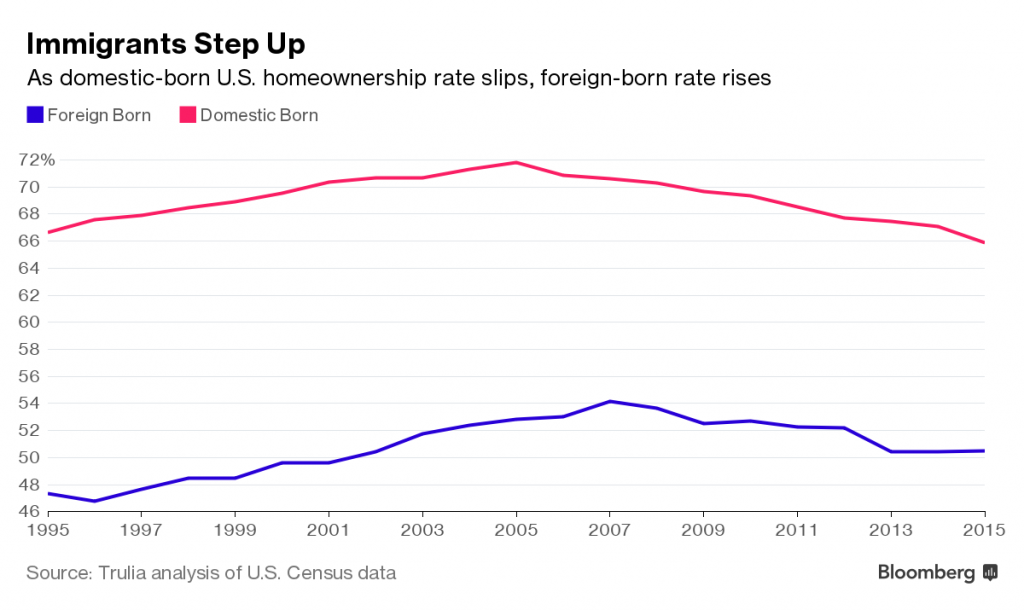 If prices dipped 10% for ANY reason, buyers would be ecstatic…..and sellers would still fetch near-record prices – no disaster there. If supply surged and demand waned, it would have the biggest impact on the inferior homes first.

In San Francisco, an Indian software engineer on a work permit canceled plans to bid on a $900,000 home. In Washington, a Brazilian nonprofit executive passed on a fixer-upper near her office. And, in Mesa, Arizona, a 24-year-old son of undocumented Mexican immigrants won the trust of a bank — a green light for a mortgage — but now fears deportation.

President Donald Trump’s immigration policies threaten to crack a foundation of the American economy: the residential real estate market. Legal and otherwise, immigrants, long a pillar of growth in homebuying, are no longer feeling the warm welcome and optimism necessary for their biggest purchase.

“I feel like with one stroke of Trump’s signature everything can be taken away, even all my hard work,” said Juan Rodriguez, the 24-year-old whose parents moved from Mexico when he was 7. He now works full time while earning his college degree.

On Tuesday, the Trump administration detailed plans for a sweeping crackdown on undocumented immigrants, saying the authorities would deport many more people without court hearings. Under Obama, the government focused on those convicted of violent crimes; Trump would lower the bar to include fraud and, in some cases, a belief the residents threatened public safety.

Even workers with green cards and work visas under the H1-B program for skilled foreign workers are worried about possible restrictions under Trump. The housing markets most at risk include Miami, Silicon Valley, Los Angeles, San Francisco and New York, which have the biggest concentrations of foreign-born buyers.

Other foreign buyers could step in. Trump’s friendly stance toward Russian President Vladimir Putin is heartening buyers from that country. They had held back after his 2014 Crimean takeover prompted Obama to impose sanctions, according to Edward Mermelstein, a New York-based real estate lawyer who represents wealthy foreigners. His Russian clients negotiating home purchases in New York and Miami more than doubled since Trump took office.