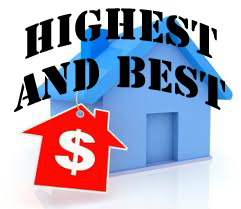 Here we are in the second week of January, and I found myself in the middle of four competitive situations already this week – and it’s only Thursday!

My listing on La Costa Avenue has been shown regularly over the last 67 days, and we had a deal previously until the home-inspector saw the lumpy carpet and thought the home was falling down.

It must have been our turn as an attractive offering this week, because we received three offers, and two other threats.  I always want to counter for their highest-and-best offer, because that’s what is fair.  I want to give every buyer an opportunity to compete, because nobody knows how much they might pay until they are faced with the fear of loss.  I also want to give the agents the chance to earn a paycheck – hopefully they will do the same when the roles are reversed.

The highest-and-best process should be a standard in the business, but sadly, it is not.  I had buyers in the other three contests, and none of the three listings agents countered for highest-and-best.

Why don’t listing agents do what it right, and counter for highest-and-best?  Are they just fat, lazy, and stupid? No!

They haven’t been on the other side of the table enough and gotten burned to recognize how unfair it is to all parties involved – especially their own client, the sellers.  THEIR SELLERS DESERVE BETTER!

You can’t blame buyers for offering less than list price just a week or two into the new year.  It is typical for a buyer to mentally deduct repair costs, or base their offer on other comps they’ve seen when they think there won’t be any competition.  But when faced with the threat of losing the property, they might be willing to pay more – and they deserve the chance to do so!