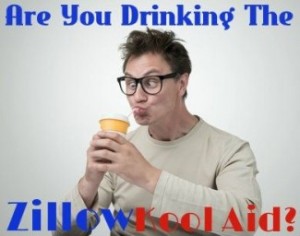 Since my Sandicor vs. Zillow post on Wednesday, I’ve had a few conversations with agents around town – including the guy who is the chair of the Sandicor committee charged with handling the negotiations with Zillow.

Every opinion was similar to this comment left over the weekend, including the standard zinger that I don’t know anything:

Jim, you were not on the committee dealing with Zillow’s demands. The demands were highly unreasonable. Sandicor is leading the way nationwide on holding its ground against giving away data to Zillow, and no agents have gone out of business because listings are not flowing automatically to Zillow. It’s not a big deal nor is it the end of the world. It’s a relief.

You’d be surprised how many people I have talked to, highly successful agents and brokers, who love that we aren’t tied to Zillow. Your comments are very uninformed and to me your opinions are in the tiny minority. Brush up on how Sandicor works and why it’s here.

All I said was that Sandicor should make the deal with Zillow so every listing agent could choose Yes or No to auto-uploading each listing.  The system is already set up that way for all other portals, why exclude Zillow?

But the Zillow Haters aren’t interested in discussing, they just want to hate.

For the record, I wish Sandicor and others would have mounted a credible challenge to Zillow years ago. But we did nothing, and now we’re on the defensive – just hoping to slow them down a bit.

The hate is short-sided, and probably understandable for those who already have one foot in the tar pit.  But for those of us who are long-termers and want to hand off the business to the next generation, Zillow and other outsiders are creating the future.

Last year it was well-documented that the #1 problem in the industry are the masses of marginal agents.  But free enterprise is solving the problem.

Zillow is educating consumers on how to find quality agents by using reviews and recent sales histories – which favors the agents who use Zillow as a marketing platform.

In the beginning, I was a Zillow hater too.  But they have evolved into one of the best resources available for both consumers and agents.  Ignore them at your own peril.

P.S.  Haters – have you seen those Redfin TV ads?  All that Zillow is doing is giving consumers a great portal, and suggesting a conduit to other agents – Redfin is spending millions on TV ads to directly take your business away.

It is the biggest threat to the status quo – companies that spend millions on advertising are going to direct the future of the home-selling business, regardless of what is actually best for the consumer.

Here’s more on the bigger picture: