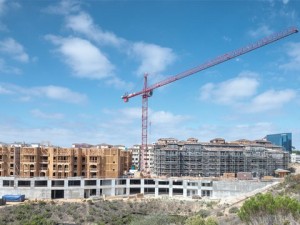 Bill Davidson told us a couple years back that we are out of dirt. More on that:

If you think San Diego’s housing market is strained and pricey now, what will it be like in 20 years? Yes, feel free to shudder.  No one, of course, can accurately predict that far in advance. There are too many variables at play. But there is one aspect of the current housing market that would seem tough to reverse.

And that’s the ability to build.

For one thing, we have finite developable land, particularly in the city of San Diego. Secondly, a portion of our population appears unwilling to embrace density — at least in their own neighborhoods — which makes it tough on planners and builders to increase supply.

If that trend continues, experts predict housing prices will continue to rise.