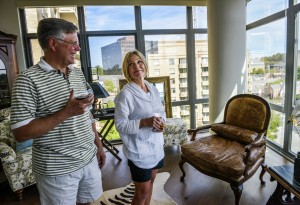 Millennials have tough new competition for the condominiums and apartments heating up the nation’s housing market: Mom and Dad.

Roughly 10,000 baby boomers are retiring each day, and recent data shows that half of those who plan to move will downsize when they do. Many are seeking the type of urban living that typically has been associated with young college graduates — so much so that boomers are renting apartments and buying condos at more than twice the rate of their millennial children.

“There’s not one thing I miss about my house,” said Abby Imus, 57, who recently moved with her husband into a condo in downtown Bethesda, Md., three miles and a lifetime away from the house they lived in for more than two decades. “I was so ready to leave.”

This new generation of empty nester is reshaping the recovery in real estate after the industry suffered its worst setback in half a century during the Great Recession. Boomer demand has helped fuel a surge in high-end housing that features two-bedroom units and large kitchens reminiscent of boomers’ suburban homes. That could have big implications for cash-strapped millennials, who had hoped to snag affordable studios in buildings developed to house 20-somethings.

The data suggests that boomers who are downsizing are relatively well-off. Harvard University’s Joint Center for Housing Studies found that those ages 55 and older accounted for 42 percent of the growth in renters over the past decade. In addition, the wealthiest tier of American households made up about one-third of new renters between 2011 and 2014.

“Boomers will pay a premium if you can give them exactly what they want,” said Matt Robinson, principal at MRP Realty in the District. “Something closer to what was in their house, and that pushes up the price; they’re happy to pay for it.”