Some excerpts from the latimes.com – thanks daytrip! 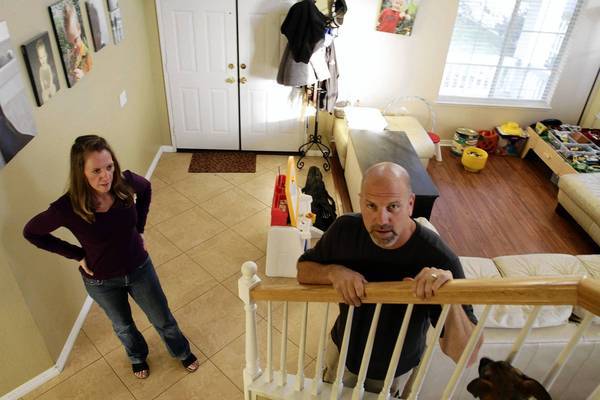 Michele and Russell Poland’s credit was shot, but they managed to buy their suburban dream home anyway.

After a business bankruptcy and a home foreclosure, they turned to a rare option in this era of tightfisted banking — a subprime loan.

The Polands paid nearly $10,000 in upfront fees for the privilege of securing a mortgage at 10.9% interest. And they had to raid their retirement account for a 35% down payment.

Most borrowers would balk at such stiff terms. But with prices rising, the Polands wanted to snag a four-bedroom home in Temecula near top-rated schools for their 5-year-old son. By later this year, they figure, they’ll be able to refinance into a standard loan.

“The mortgage is a bridge loan,” said Russ Poland, now working as an insurance investigator. “It was expensive, but we think it’s worth it.”

In the aftermath of the housing crash, there’s no shortage of Americans who, like the Polands, are eager to rebuild their shattered finances. In response, lenders are emerging to offer the classic subprime trade-off: high-priced loans for high-risk customers.

Today’s high-risk lenders differ from those during the housing boom in key ways. These lenders say the new subprime mortgages are actually old school — the kind of loans made in the 1980s and 1990s. In other words, a borrower’s collateral matters, down payments matter, income and ability to pay matter.

Among those hoping to reverse the trend is the Polands’ lender, Citadel Servicing Corp. of Orange County. Chief Executive Daniel L. Perl said he has tested the water by making a few dozen subprime loans since late 2011, mostly with his own money rather than investment capital.

The Polands, among the first to receive Citadel loans, are part of a success story, Perl said. None of the loans has gone bad; about a third have already been paid off. With that track record, Perl recently raised $200 million from private investors. He’s hiring 55 employees to help him make loans through mortgage brokers across most of the West, and he’s moving from Citadel’s Aliso Viejo location to larger offices in Irvine.

“We’re looking to build it up over the next 24 months to $30 million to $50 million a month,” Perl said. “It’s a decent business plan in a credit-barren world.”

Perl requires 25% to 40% down, depending on credit scores that can drop as low as 500 on an 850-point scale. His potential customers, who pay a minimum of 7.95% interest, include higher-income as well as lower-income borrowers.

“Quite a few” affluent borrowers are good credit risks, Perl said, even though they had recent short sales — they sold homes for less than they owed on their mortgages. Perl also writes mortgages that exceed the Fannie Mae and Freddie Mac threshold for conventional loans, which varies but tops out at $625,500 in the most expensive areas.

“They come from all walks of life — doctors and lawyers as well as blue-collar workers,” Perl said. “As long as they have the ability to pay and equity in their homes, they are a candidate for one of our loans.”

John C. Williams, president of the Federal Reserve Bank of San Francisco, sees no reason that subprime mortgage bonds can’t reemerge in “plain vanilla” form, as opposed to the complex concoctions that ended up as “toxic assets” in the meltdown.

“I can’t understand why it hasn’t come back sooner,” he said, pointing out that there’s a strong market for bonds backed by subprime auto and credit-card loans.

“California has been famous for devising exotic mortgages,” Williams said. “But the reality is that they held up rather well until we started doing things like giving them to people with no jobs.”