Amir and Mojgan Moghadam spent $1.4 million on their new home in Irvine, Calif.  But to make it absolutely perfect, they spent a further $550,000 on builder upgrades—including $28,200 for a conservatory, $2,600 for a Sub-Zero ice maker and $495 for five exterior wall-light outlets.

Buying a newly built home is a lot like buying a new car at the dealership—optional features cost extra. Buyers will pay more for premium granite, a fancier fridge or an epoxy-coated garage floor. And upgrades can be a lucrative part of a builder’s business, with profit margins as high as 60%, depending on the option, according to John Burns Real Estate Consulting. 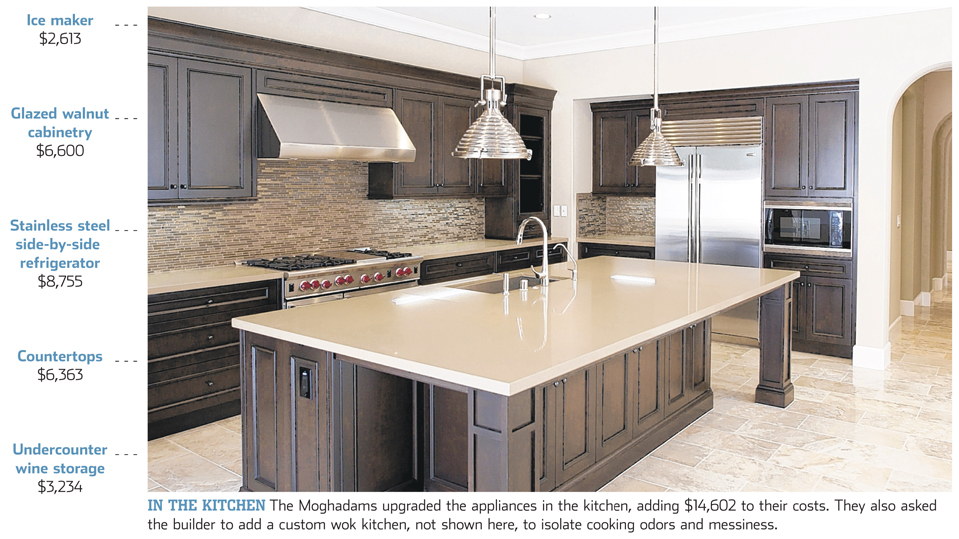 Indeed, buyers like the Moghadams are helping builders return to profitability after a long downturn. During the housing boom, homes were loaded with expensive features, and buyers snapped them up, regardless of price. These days, however, upscale buyers are choosier, selecting pricey options that are within their budgets and still practical for the resale market. An estimated 10% to 30% of a home’s base price is spent on upgrades. And companies say these optional features have been spurring growth in high-end home construction.

Record-low interest rates are driving much of this spending, with a 30-year, fixed-rate average of 3.68% for conforming loans, which are below $417,000 in most markets, or 4.13% for larger loans, according to HSH.com, a mortgage-research website.

Monica Kaiser, for instance, added nearly $70,000 worth of upgrades to the $1 million-plus San Diego home she and her husband purchased in December. The Kaisers decided to spend the money now—instead of later—for the upgrades they wanted. The Kaisers opted for a $10,000 staircase with wrought-iron balusters and nearly $4,500 for tile and stonework in the home’s 4½ bathrooms, along with other features from builder Standard Pacific.

“With interest rates so low, you’re not going to be able to get what you want any cheaper at any time,” says Ms. Kaiser, a mother of three who works for local media outlet. “To put a lot of these upgrades in down the line would have just been silly, because we’d be paying more to take out a loan or dipping into other assets.”

Some builders present buyers with thousands of choices that let them build a near-custom home that won’t resemble anything else in their community.  Customizing a home can make a customer less likely to cancel the deal. “They’re emotionally attached to what they have designed,” says Joan Marcus-Colvin, senior vice president of sales, marketing and design for the New Home Co. “They have actually pictured themselves living in that surrounding.”

In the past decade, builders have increasingly been allowing buyers to pick favorite items through a website or app. Buyers can almost think of it like a game: They choose options to build their dream homes, then add or delete items as the budget permits.

“It was like I was going to the store,” says Ms. Moghadam, the Irvine, Calif., buyer of the New Home Co. house. “I would sit on my iPad and I would just pick out all the options I liked: cabinets, sinks, hardware, faucets. You could just do it at home and have fun with it.”

The most money is usually spent on kitchens, bathrooms and flooring, according to BDX, the marketing-services and technology company behind the Envision online design center that helps customers select options. Buyers upgrade flooring 73% of the time, cabinets 70% and appliances 63%, the company says.

One upgrade tends to hold its value: land. Former NFL player Michael Hamilton decided to build a new Standard Pacific home in San Diego after seeing a roughly half-acre lot with views of coastal sage shrub and other native plants near 1,600 acres of preserved open space.

Premium lots in the upscale Bellasario at Stonebridge Estates community cost up to $215,000 above the neighborhood’s $900,000 base price. The upgraded lot gave Mr. Hamilton room for another upgrade, a $100,000 backyard cottage for guests. “I wanted that lot and I wanted the casita,” he said, adding that “I wish I would have gotten a couple more upgrades.”

Hat tip to Profhoff for sending this in from wsj.com:

The model of the house Hamilton bought:

New post (Been Here Before) has been published on http://bubbleinfo.com - https://www.bubbleinfo.com/2022/09/25/been-here-before/

One of the malinvestments from taking policy rates to zero percent: the creation of an economic system that involves passing long-lived assets back-and-forth, back-and-forth.

The United States has about 1 realtor for every 100 people in the labor force. More than you-know-when.