San Diego City Beat has uncovered a rather interesting Wikileak story regarding a wedding thrown by Dagestani ambassador to Moscow Gadzhi Makhachev. The reason it is interesting is that the cable also mentions that Makhachev had homes in San Diego and sent Dagestani youth (including his sons) to “a military type high school near San Diego.”

City Beat says Makhachev denied in published reports that he has homes in San Diego, however, they found that he actually owns four homes in Carlsbad, all of which we know well (one is located next door to Senior Grubby’s see below) and that he has sent 15 boys through Carlsbad’s Army & Navy Academy. 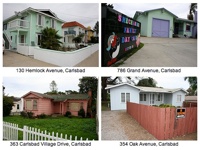 The more interesting news is that, aside from donating $100,000 to the Army & Navy Academy, Makhachev reportedly had connections with a local machinery exporter and Carlsbad developer Bernard Goldstein, a man who was “indicted by a federal grand jury in November for allegedly hiding millions of dollars in overseas bank accounts.”

City Beat says that Goldstein has since “fled the country.”

How’s that for some local intrigue? Click the link for all the details in a well researched piece of investigative journalism from City Beat senior writer Dave Maass.