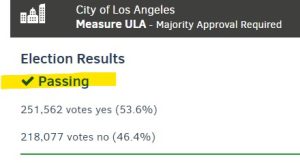 It looks like the hefty L.A. mansion tax is going to pass.  Don’t be surprised if other cities and counties do the same and pit the rich people vs. everyone else under the guise of solving homelessness.

Measure ULA, the so-called “mansion tax,” is a ballot measure in California that would impose a one-time transfer tax on commercial and residential real estate sales valued at over $5 million.

Laura Raymond, organizer and spokesperson for the Yes on ULA campaign and director of the Alliance for Community Transit-Los Angeles (ACT-LA), a coalition of 42 organizations working toward transit and housing justice, said that the costs of the tax will be carried by the city’s wealthiest and the funds will benefit those most vulnerable.

“The cost-benefit tradeoff is a huge win, and one that will make our city not only more just but also a better place to live for everyone,” Ms. Raymond said.

If passed, the tax will go into effect in April 2023. Without a sunset clause, the tax would be permanent, though it would also be adjusted to keep pace with inflation. To avoid incurring these additional taxes, homeowners of multimillion-dollar estates looking to sell should act before next spring.