A fantastic spin on higher mortgage rates by two economists – an excerpt:

Mark Fleming – That’s a great question, Odeta. And when we subtract the core CPI inflation rate from the 30-year, fixed mortgage rate, we find that, with air quotes here, mortgage rates are actually negative.

Odeta Kushi – Say what now? Here we’re talking about rates as high as 5%. And now you’re telling me rates are negative?

Mark Fleming – Yep, over the last half century, there have only been two other times when core inflation was higher than the 30-year, fixed mortgage rate. Both of those were in the 1970s.

Today, we’re experiencing the extremely rare phenomenon of real, negative mortgage rates. So, while we may expect rising mortgage rates to cool the market, real estate still looks cheap, given the high inflation, not to mention the appreciation benefits that people get from the stellar asset returns that we’ve experienced recently.

Okay, thinking like a finance guy for a hot minute here. If the price of everything is rising faster than the price of borrowing at a fixed rate, aka the negative real rate of mortgages, to own an asset that’s appreciating in value. Hmmm.

Odeta Kushi – Yeah, so a significant slowdown in purchase demand due to rising mortgage rates is not necessarily a foregone conclusion, not to mention that house prices, and even sales to a lesser extent, have shown to be pretty resilient in the face of rising mortgage rates. You can refer to our podcast episode 15, if you want to know more about this.

But the SparkNotes version is in four of the last six rising mortgage rate eras, the existing-home sales increased or only declined after prolonged resistance. Home prices show even more resiliency.

Apart from the 1994 rising-rate period when house prices declined slightly and briefly, house prices have always continued to rise, albeit more slowly, when rates have increased. That’s because home sellers would rather withdraw from the market, rather than sell at lower prices, a phenomenon we refer to as ‘downside sticky.’

Of course, relative rates matter and mortgage rates have been in the 2-to-3% range during most of the pandemic. So, rising to about 4% may have a larger impact than in the earlier periods. So, it’s unclear how much rising rates will cool the purchase market. But, how would rising rates cool the housing market anyway? By reducing affordability, of course, and causing buyers to pull back from the market. In other words, by cooling demand.

Read/listen to the entire podcast here:

JtR: Let’s note that the highly-financed buyers don’t get much of a vote because in the bidding wars over quality properties, they are sent to the back of the line. The ‘cooling demand’ from financed buyers pulling back only means fewer offers.  The market’s direction will be determined by the cash buyers, and/or the big-down-payment buyers who will shrug off higher payments when they hear a catchy buzz word like ‘negative mortgage rates’. The location/condition of the home will matter more to the sales price than rates. 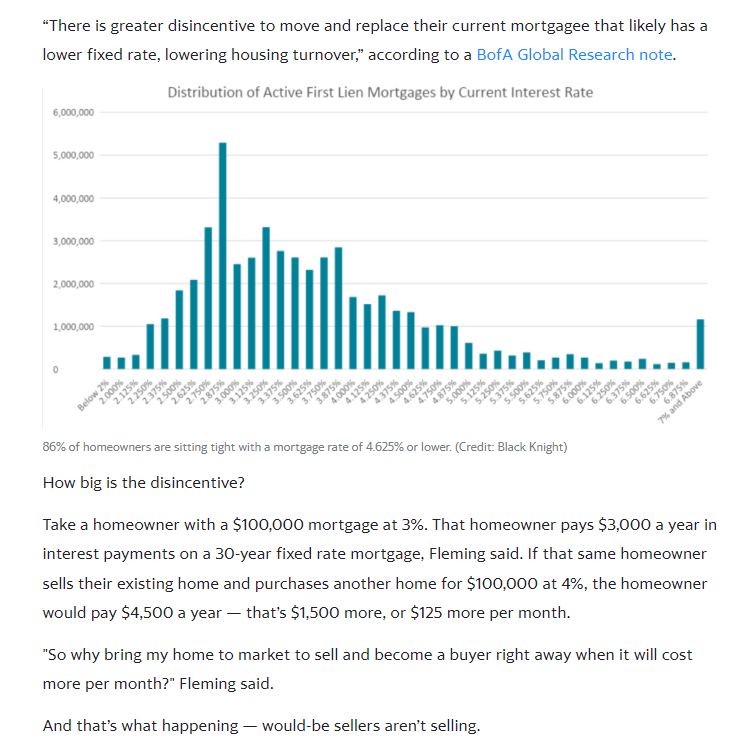