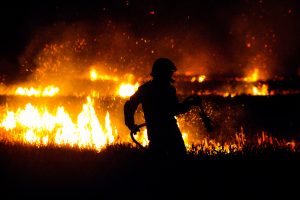 The WSJ recently highlighted the fire-insurance problems in California – excerpts:

Worried about wildfire exposure and frustrated by state regulations, insurers in California have been cutting back on their homeowner businesses. Now, affluent homeowners are feeling more of the pain, as two of the biggest firms offering protection for multimillion-dollar properties end coverage for some customers.

As early as this month, American International Group Inc. will begin notifying about 9,000 customers in its Private Client Group that their home policies won’t be renewed this year. The change is part of a plan by AIG to cease selling home policies in California through a unit regulated by the state’s insurance department.

AIG told insurance brokers in an email late last year that some policyholders instead may be eligible for coverage via another AIG unit. The other unit operates alongside other so-called excess-and-surplus lines insurers, which have more freedom on policies’ rates and terms than do insurers in the broader, tightly overseen home-insurance market.

“AIG is the first high-net-worth carrier to say ‘we’ve had it, we’re divorcing ourselves from California’s regulated market,’ ” said Jim Tolliver, an insurance broker in San Francisco with Woodruff Sawyer & Co., who fears others will follow suit.

Chubb Ltd. the biggest high-end insurer in the state, is continuing to non-renew some policies. But, “we are still accepting new customers across the state in areas where we have a fair chance of earning an adequate return,” Paul Krump, a Chubb vice chairman, said last week.

In an earnings call in October, Chubb Chief Executive Evan Greenberg said the insurer’s California shrinkage was “not a small amount” in locations “both highly exposed and even moderately exposed to wildfire.” He said “someone else will have the pleasure of writing” business for which “we cannot charge an adequate price for the risk.”

Chubb, which declined to provide policyholder figures, aims to offer excess-and-surplus policies to many policyholders who aren’t renewed.

The moves by AIG and Chubb follow years of non-renewals by mass-market insurers. California regulators have been encouraged that parts of the broader market are showing signs of stabilizing, thanks to recent rate increases. Allstate Corp. , Farmers Insurance and some others have committed to adding policyholders.

Some insurers are frustrated that California regulators require them to set home-insurance rates based on their historical loss experience, not projections of future losses that are determined by catastrophe modeling. Such models can reflect detailed, location-specific data that the insurers feel they need amid escalating wildfire activity tied partly to climate change.

If your home is near any sort of brush, forget about finding insurance with a preferred-market carrier. The areas affected in San Diego are Rancho Santa Fe, Carmel Valley, Fallbrook, Escondido, La Mesa, Alpine etc. The Los Angeles area is extremely difficult. I work for an independent brokerage firm and almost all of our preferred markets will deny writing business in such areas. I have to refer many markets to State Farm who continues to write homes in these areas until they are too saturated. Or the other options is finding a non admitted insurance solution who’s rates and filings are not implemented by the state, coverage is lacking and premiums are much higher. If you cannot get a quote form a non admitted carrier, the CA Fair Plan is the last resort and they are capped at a total insurance value of only $3 million.

How about people that have property next to canyons?

Don’t be surprised if they receive a notice of non-renewal due to a change in underwriting that the company has taken to mitigate fire losses on that particular area. Many of clients are either being non-renewed for this very reason or the company is choosing to pull out of CA completely. These companies are AIG which specializes in insuring million dollar homes and Nationwide Private Client. AIG and CHUBB insure many celebrities in the Hollywood hills and throughout LA. Trust me, insurance companies don’t have favorites either. Word is that Oprah’s home is getting non-renewed by either CHUBB or AIG.

Is there a map on “highly impacted fire areas” similar to flood plains?

Not that I am aware of. Nowadays companies use google maps and other tools to view homes. And if there are any adjacent canyons or open space, they consider it a fire prone are.

Can new owners in affected areas get fire insurance?

Yes through the CA Fair Plan. The CAFP only covers the home for Fire and Vandalism. Whereas a typical homeowners policy includes liability and water damage. In conjunction with the CAFP policy, homeowners must purchase what’s called a wrap around policy or difference in conditions policy to supplement it.

How much are premiums rising, with rising home equity?

Premiums are rising based on where you live. If you live in an area near brush, expect your premium to rise at minimum 10% but more often I see 20% and I have seem premiums double. Insurance companies choose to take more and more rate to make up for all of the wildfire claims paid out over the last several years. And it’s going to continue to get worse before it gets better.